Snug in her dorm, Questions for my ONC 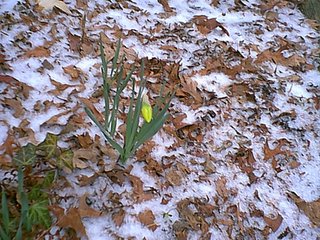 Quite a relief to talk to my daughter once she woke up from sleeping for 10 hours after she got back to her dorm from the hospital. Of course it was a comedy of errors and not so comical if you're in pain. Finding a pharmacy that was open at night on Sunday was a challenge. The hospital pharmacy was closed. The doctor forgot to write his number on the script so the pharmacy they did find had to call the hospital and verify it. All this time my daughter who had an appendectomy at 8:00 am that morning was sitting there doubled over. There had been security issues at her dorm and her key card didn't work so she had to sit on a bench until her friends could get someone to open up the dorm and let her in. But all's well that ends well and she got to sleep 10 hours straight. That wouldn't have happened in the hospital. The daffodil reminds me of when JF was born. We went to the hospital with ice and snow on the ground and once JF was born, our daffodils bloomed. They always bloom on her birthday and the picture I am posting was one I took a few years ago where they bloomed in the snow and ice like they did the day she was born.

I am trying to come up with a list of questions for my doctor when I see him Thursday. Want to take bets on whether they'll take one look at my list and run in the other directions.

1. Can the “supposed lipoma” be tested with FNA today?

2. Can I have an ultrasound of the region where they can’t rule out melanoma in the groin?

3. Can you excise the supposed lipoma and get some tissue from the questionable groin area in one surgery?

4. If my ongoing symptoms are part of an autoimmune response, are steroid injections for pain risky?

5. If I do have an autoimmune response set up to fight MM, is it possible that the 4 cm mass in the inguinal region which was imaged a year ago and which the MRI said was “consistent with a tumor recurrence” and the PET said was “worrisome for an FDG avid malignancy” would have gotten smaller on repeat scans because I’m in that small percentage of people who have untreated melanoma tumors that get smaller?

6. My last PET/CT scan (March 2006) said that the FDG in the inguinal region was most likely due to changes due to surgery. My PET/CT prior to my WLE and SNB said the same thing and I had 2.8 mm of melanoma removed which was said to be consistent with residual dermal melanoma. If the issue in my groin is small, wouldn’t that be the reason for the same language?

7. I was told that I would get an annual MRI of the brain during my six month check up in August of 2005. Since my neurologist had done an MRI as part of my work up with him a year ago, I didn’t ask about that in March when I got the PET/CT scan. Since it’s now been a year since I’ve had an MRI of the brain, will I get one as part of my follow-up?

8. If the current issues turn out to be ruled out as recurrences, can we establish a plan to account for some of the oddities of my case? It will be hard for me to go by symptoms since my multiple symptoms are managed by strong medications.

I'm making progress, I'm returning to my blog to delete one long and one short question. Who knows by Thursday I may have it down to something reasonable.
Posted by Carver at 6:13 PM