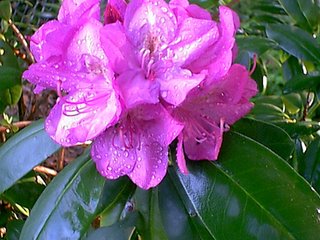 I loved this rhododendrun. I planted it about 10 years ago and it had 9 years where it thrived, got bigger and bigger and reminded me of the rhododendrun in the mountains where my grandmother lived. Last year I lost my rhododendrun to the drought and to my stopping the massive irrigation I did for years. I didn't have the energy for keeping on top of it the first summer after my LND and I am moving more and more towards survival of the fittest. However, I regret letting the rhododendrun perish. Odd too since much more fragile plants survived. That's because I selectively watered but I assumed the large established pants were safe and most were, but not the rhododendrun. It's still there but is bare wood. Perpetual winter look even though it didn't lose it's leaves in the winter. I like bare trees in the winter and even think the bare rhododendrun has charm which is why I leave it as a reminder of what was.

My grandmother is still alive at 102 although my mom died 16 years ago at 65. My grandmother kept her house in the mountains which she and her husband built. My grandfather died of sleeping sickness when my mother was an infant and my grandmother remarried which is why I have my Aunts and Uncles. My grandparents went west with a group in the mid 1920s and my grandfather got sleeping sickness and died in Oklahoma. I was named after him. My grandmother came back home to Boone with mother and that's where she stayed. Last year she finally had to sell her house in Boone because it is so expensive at the retirement community where she lives in Winston Salem. She's been there since she turned 88 but used to go back to Boone and spend time in her house there.

We had her 96th birthday at her house in Boone and all the children and grandchildren and great grandchildren made it. I remember when my grandmother turned 80 and my mother said it was more important to go and spend time with her while she was alive than make it for the funeral. We all made it from far and wide, not so far for me. I remember when I went through a stage of not being so close to my grandmother and my mother said she wouldn't live forever and, more for me than her, I should mend fences because it would be hard when she was gone. At some level I think my grandmother will live forever though I know it's not true but I'm greatful to have reconnected with her through the years. She's a remarkable women.

My Grandmother and Carver Young and mother headed west and after Carver died, my grandmother was too sick herself to be part of a funeral. She almost died too but my mother wouldn't take formula and was wasting away herself. The nurses told Memi that the baby would die if she didn't fight to live so she could breastfeed her. She fought and the rest is history. She credits my mother with saving her life but of course she also saved mother's life by living. I think about the strength it took to get home and support herself and the baby. Her second husband was an alcoholic and they eventually separated and my grandmother put 5 children through college on her own. Hard to imagine what it took for her to do what she did.
Posted by Carver at 7:18 AM

Carver, I'm so sorry you lost all your blog entries. I was so looking forward to finally having the time to sit and catch up with those I've missed the last few days.

If it's any sort of consolation, it's exactly the sort of thing that happens to me... if anything computer-related is going to crap the bed, it'll do it for me.

You've made a good start, however, with rebulding. I loved the story about your grandmother, she sounds like quite a woman.

Rhododendruns can be difficult. My mother is Scottish and every year we'd go up there for a vacation when they were in bloom. She tried planting her own, but one after anohter, they died off. Eventually she gave up and planted rose bushes.