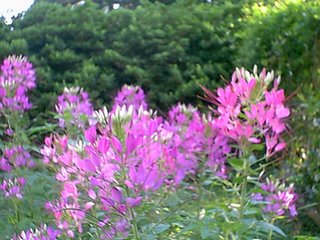 The morning after my scan report appointment with new plans in place also brought a call to let me know I'm down for an oncology appointment next Thursday morning. My doc does Thursday clinic for all his regular patient appointments. I've occasionaly been worked in earlier in the week, where he comes to clinic after surgery, meetings, and such. I'm fine waiting for the appointment since the new meds are doing a great job with the pain. I'm a little more sedated than I like but there is always a trade off.

My cleome field above isn't as good of a photograph as some I have but I like the fuzzy look. I'd prefer that I not feel so fuzzy. I don't know how people do the strong treatments which knock them through and around and under loops. I'm a wimp about that stuff which had a lot to do with why I didn't do interferon. My doctor 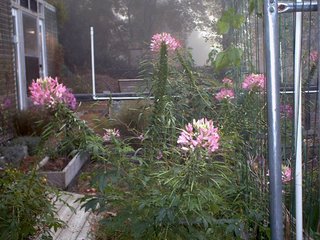 was neutral about it which was part of why I made the decision that I did. However, my strong reservations about how I'd handle INF was the deciding factor. The odd part is that I feel, to an extent, that my body has put on it's own immunotherapy show. Beginning 14 months ago, I started having symptoms similar to those with strong side effects to INF or to chemo. The first question that all the doctors I saw asked, when my symptoms began was whether I was doing chemo or had radiation treatment. It was so weird.

Oh well it is what it is and at least the only things which showed up on my recent scans are remote in terms of a recurrence. The more I think about it language like, cannot rule out melanoma is pretty promising. I've had language like consistent with tumor recurrence in the same area a year ago and it got better and better on subsequent scans. Maybe what I need is a little faith. Maybe I'm overthinking everything. Maybe I should go to the art museum for an indoor slow stroll. Maybe, maybe, maybe . . .
Posted by Carver at 9:49 AM

I responded to you on MPIP, but just wanted to say here that I had a very similar report (CT w/contrast) back in April re the groin area around my LND. By July they no longer considered it an issue, but rather surgery-related. I hope that's the case with you.

I'm glad you're managing your pain better now, that fuzzy feeling is one of the things I hated about chemo.

I wish somebody had warned me about the possible weight gain after LND surgery. I gained quite a bit of weight myself from the immobilisation and comfort eating (thank God for chocolate). Even though my leg is doing pretty well now, I still can't walk for a long time, or rapidly without pain.

I can so relate to what you're saying and love the way you say it. I wish you the very best and am thinking about you.

Just take a deep breath and exhale, Carver. And then go to the Art Museum or spend an hour amongst your flowers with your camera at the ready.