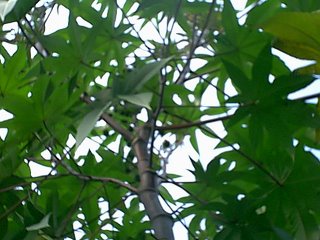 What a relief that JF is recovering well, resting, and will be spending the night at the hospital. Hard to believe she had an emergency appendectomy her first week back at school. At least with the laporoscopy surgery her recovery time should be swift.

Castor bean plants are a favorite of mine but I stopped growing them after I was told how poisonous they are for animals. I grew them for two years and they got enormous. One was close to 18 feet tall from two seasons of growth before it got zapped in the winter. What I did was grow them one season, transplant into huge pots and put them in the greenhouse for the winter and then planted 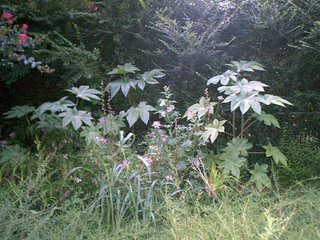 them back outside the next spring. The problem was, after two growing seasons they were too big to fit it the greenhouse even if I had dug them up and found a monster pot. The cool thing was they self seeded and I was all set for a third year of castor bean plants until a friend told me about the risk to animals. Too many of my neighbors dogs occasionally get loose and come into my back garden and I was told they would be at risk. I also have a ton of cats that hang out in my back garden but I doubt they'd eat castor bean seeds. Not sure if any animals would be at risk but it's not worth it so that was the end of my love affair with castor bean plants. I did enjoy them so. I hope JF has a good last semester at school and isn't thrown off her rhythm too bad by the appendectomy. I'm grateful that she has so many friends that are visiting her in the hospital. It feels so weird for her to have surgery away from home.
Posted by Carver at 6:40 PM