Curves in the road 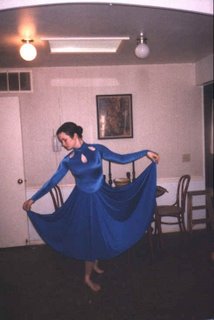 My daughter had an appendectomy at 8:00 am this morning and I'm waiting to hear how it went. It was performed in a small hospital outside Baltimore where she goes to school. She called before going to the hospital and I requested that she please go to Hopkins or one of the other famous hospitals in the area and she said her friend who was driving her wouldn't be able to find Hopkins and that it was probably going to be nothing anyway. Then I heard that her blood work was normal and she didn't have a fever but was waiting on the CAT scan which would probably be very late as the hospital was busy. She said that I should go to sleep and she or one of her friends would leave a message on my cell phone. I did go to sleep like a log but when I woke up at 3:30 am instead of going back to sleep right away I checked my cell phone messages and both she and a friend had left messages telling me that she was getting an appendectomy at 8:00 am in the morning. Incredibly enough I went back to sleep and shortly after I woke up again at 7:00 am my daughter called to explain it was going to be done with a laporoscopy which was a huge relief. When my appendix was removed it was part of an abdominal surgery. At first they thought it was my appendix and then found out it was a humongeous ovarian cyst but while he was in there the surgeon took my appendix too for the heck of me. I had no idea they could do appendectomies with a laporoscopy. She should be back in her dorm either tonight or tomorrow and fine for classes on Wednesday. I had assumed until she called it would be much worse as I was out of work a long time when mine was removed as part of abdominal surgery. I wish I was there but she said she's fine and had 8 friends in her room last night and they are returning after she has time to wake up after surgery. I'm sure the hospital where she is being treated is fine although my comfort level would be higher if she was at hopkins. I love the picture of her I am posting above from 1999 when she was warming up for a modern ballet recital. It captures a moment in time for me. Hard to believe that was 7 years ago. I have a ton of photos of her d 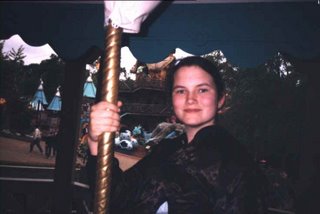 ancing in the house as a child that are wild. Some when she was about 5 and was dancing in a slip with her hair twirling wildly. She broke her collar bone falling out of a tree at five and had her arm in a sling but was determined to dance in her recital. Her doctor said she was recovered enough to take her arm out of the sling for the dance if she was careful.

I just heard from her and she is doing fine, back in her room. She said the doctor told her most people do spend the night in the hospital but if she's doing exceptionally well she can go home tonight or rather back to her dorm. I told her to spend the night in the hospital if she can because they will do a better job with pain relief in the hospital if she needs it. She said that the pain isn't even as bad as it was prior to surgery which is a great sign. The second picture in this post was taken the same year as the dancing one. We went to Williamsburgh and had a blast. She went not to long after that with friends but I was glad I took her although I wouldn't have if I'd known she would be invited to go with a bunch of friends so soon after we went. Life is so unpredictable. I never would have guessed that she'd have surgery before me. Mine will be a simple excision on my back of the subcutaneous mass assumed to be a lipoma and maybe a biopsy of the groin if the dubious area has something specific my doctor can go after. That was at the forefront of my mind and now it's pushed way back. If my daughter can recover quickly and not have any more health issues, I will take what comes my way. She never heard back about the cardiac MRI which is probably a good sign but the doctor at Duke where that was done regarding the PFO (congenital heart defect) said he or his P.A. would call and they didn't. I am going to see if my daughter minds if I keep calling and bugging them about it. I can say she just had an appendectomy and isn't up to calling herself, will they please call me.
Posted by Carver at 11:07 AM