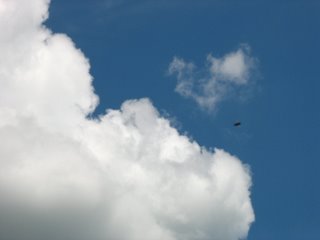 The dirty spot on the sky is either a bee or a bird. I can't tell which but I was trying to photograph a very fast bird and caught something, but hard to tell what that something is. I love August and September skies with the exceptional puff ball clouds they often have. When I as a child, we always went on vacations during August. I think my favorite part of road trips was watching the amazing clouds and weaving stories out of what I saw. On my way home from getting 3 MRI's, I was in rush hour traffic but was saved by gorgeous clouds which I could watch while I waited for the traffic to move.

I remember driving my Dad to Duke when he was at the end of the end of his long run with congestive heart failure. It's only about a half hour from where he lived but was stressful at first because I frankly wasn't sure he'd live to the end of that trip when we set off. As it turned out he lived to go home and had two months more with us. He had an appointment for check in at Duke, in a week, but his condition went from bad to worse and I was told to bring him to ER to check him in through there. Someone met us and got him right in a room. On the way there, he was a little confused and briefly thought we were going to the mountains. We both enjoyed the clouds and discussed past trips both to the mountains and to the beach with similar skies. It was an oddly pleasant trip, mostly because of the beautiful clouds and memories.

I am more myself now that the pain is under control. I had reached the point where I thought anything was better than the pain. Part of it was my fault. I could have called my pain doc a month ago and told him I needed stronger pain meds but I like to have as little to do with him as possible. He's not looking for causes like my other doctors are and I try to avoid him and any personality conflicts. Also, I've been scared to keeping upping pain meds for fear I'd miss something important (early warning signs). At this point I realize no matter what's wrong with me, too much pain makes me lose myself in unacceptable ways and I have to stay on top of it in order to stay on top of the rest.
Posted by Carver at 9:29 AM