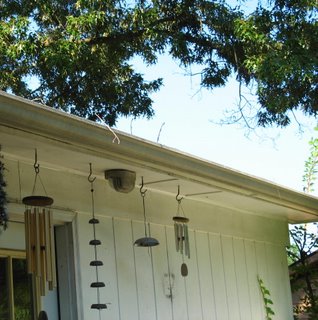 During a strong storm my wind chimes are almost orchestral. I have twice as many as are pictured here. I love wind chimes. They hang in a row outside the french door which a friend put in where one of my bedroom windows used to be. It allows me to step out on the deck from my bedroom. I can also easily watch the birds on my deck without getting out of bed. I am aware of how sedating all the meds I take are because even during strong storms with the wind chimes singing like crazy, I no longer wake up. When I do wake up, I have often incorporated the songs of the chimes into my dreams. The odd thing about the sedating meds is they don't keep me from functioning during the day. Maybe all that dark french roast coffee I drink is a factor but I'm up from morning to bedtime but I sleep deeply and long when I do go to sleep which is a blessing. What bothers me about the meds is the ones that help with neuropathic pain but were designed for something else are the sedating ones. If I only took pain killers, I would have few side effects. The pain killers go straight to the pain and I don't notice any side effects. However, the neurontin and elavil (recently added to my regimen) are the ones with the noticeable sedating and brai 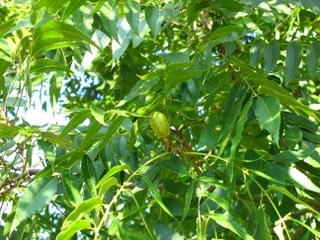 n fog side effects. Both of those drugs were originally developed for psychiatric issues but they discovered they were good for treating pain off label. The docs don't have a problem increasing meds like neurontin to high levels although I have a problem with how they effect my brain power. The docs have to be conservative, except short term, with how they prescribe pain killers in the opiod class. They do prescribe them for me but they want me taking the least amount possible and they prefer to increase the other ones. I've been taking neurontin for over a year and am up to the maximum dose. That's why it was necessary to add elavil to the mix as well as temporarily increase pain killer dose when the pain got worse. I hate taking all of this crap but I most hate the brain fog ones. What bugs me the most is finding out through reading that as long as the other meds (vicodin and percocet) are only taken for pain and aren't mixed with alcohol, they aren't addictive. That was a huge break through in pain management when the doctors discovered that but the problem is they have to weigh whether the patient is a potential abuser and they all have to give their lecture on not abusing opiods. Once my doctors get to know me, they realize I'm not an abuser. The problem is with each new doctor, that's something they have to weigh and it pisses me off. If I didn't need them, I could go back to drinking wine which I enjoy. As it is, I'm too scared to drink alcohol at all except for a glass of wine with birthday, thanksgiving, Christmas and Easter dinner. For the past year and a half those were the only times I had any alcohol. I do everything right. I have educated myself and am very careful. I don't take strong meds when ibuprofen will do. What I hate is the off label meds which aren't regulated in the same way as other pain killers, have to be taken each day in the same amount. They aren't the kind of thing you can only take when you need them because they work by building up in your system. Therefore, I'm left in a perpetual fog which I can't stand. However, I can't work and function without medications so I'm stuck with the way the doctors do it. I understand the reasons why it's like this but it bugs the shit out of me that it's okay to give patients drugs which effect their ability to focus and be as productive as they are capable of being but it's not okay, except in extreme circumstances, to boost the pain killers to the point where they do the job. I didn't know this before I was in this situation but the crazy part is I don't feel the strong pain killers at all. I can take them and be totally myself because, as I said, when they are only taken to treat pain and not mixed with alcohol, you don't get a buzz. They go straight to the pain. That's why I know I'm not taking too many because I don't get any side effects from them but I also know they are the meds the doctors have to be conservative about prescribing. I don't blame the doctors. It is what it is but what it is, is nuts. I wonder if I will get the pecan pictured above, which is dangling over my deck along with many others, or if the squirrels will beat me to the punch. I may actually have enough pecans in my heavily laden pecan tree for me and the squirrels.
Posted by Carver at 8:08 AM

My money's on the squirrels beating you to the pecans. :D

Your primary sounds very much like mine, only mine changed very quickly while I was pregnant. I'm convinced that there's a link between mel and pregnancy, you hear it so much.

I can relate so much to your comments about taking meds, I'm terrible with it and dislike it quite strongly. The brain fog from chemo made me feel like I was going quietly nuts.

But you sleep well, that's something. There's nothing like laying wide awake a 3am and feeling like the only person in the world...

Hang in there, Carver.