I went for a walk today and they weren't after me 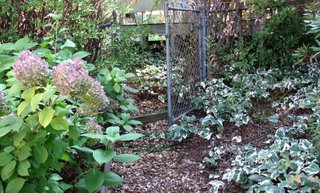 I went for a walk today, wooohooo, first one since Monday and I did okay. I was distracted from the fact that it wasn't that easy to walk when I noticed a code enforcement truck parked in front of one of my neighbors, whose house is behind mine. This was the same neighbor who called to complain about my composting set up attracting mice almost a decade ago. Back then I had a well maintained garden and a productive and neat composting set up and the city inspector basically commended me on what a good job I was doing of re-using my garden waste and kitchen scraps. At this poin 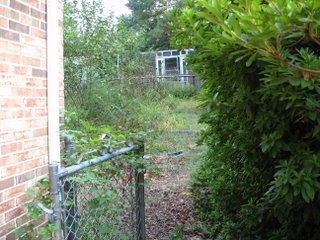 t I'm not even bothering to try to continue composting other than big leaf piles with a few clippings periodically thrown in. My habitat garden gets wilder and wilder and is best viewed in close ups of individual flowers except when there is a lot in full bloom. I was relieved to get home and find that there wasn't a notice stuck on my door saying - WEED OR MOW by order of the City of Raleigh code enforcement division. Perhaps they did come by but couldn't maneuver through the gates on either side of my back garden and for that matter couldn't fit their truck in between the dinosaur azealeas. Sometimes my garden is too wild even for me and I have a high threshold for wild. I have to remind myself that even when I had more energy for weeding and working in my garden that certain times of year make me wonder if I'm going over the top from habitat garden to abandoned yard. Then the seasons change, new plants flower, winter does it's 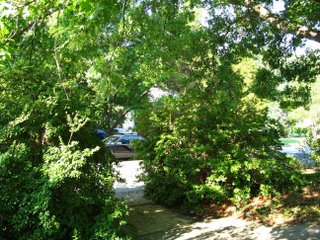 major weeding job. Generally in spring I'm amazed that I ever despaired of my garden and it's not til late summer that I start to wonder if the city enforcers will be sicked on me by my neighbors. Then fall comes and the little white daisy like flowers are everywhere and the marigolds continue blooming as the grasses die back and the gerber daisies will sometimes get a second wind before they are hit by a strong frost. Sometimes my irises and lillies are confused by the cold then warm then cold then warm weather we often have in NC and will bloom again in late fall and somehow still bloom in the spring. The fall leaves also dazzle and distract me from so much left undone. Hopefully I won't let it get to the point where the city enforcer really do have to giv 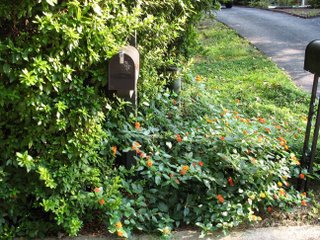 e me a hard time. In general, I suspect they want to leave someone like me alone who is really trying to be environmentally sound as opposed to people who have waist high grass that attracts mosquitoes and little else. Then again the waist high grasses are also environmentaly sound. If people would only mow twice a year they could end up with mini meadows in front of their houses instead of the uniform little yards most people seem to go for around here. Sometimes I see the benefit of having a uniform little yard. If that's what I had then I could occasionally pay someone to tidy me up but as it is I really can't. I'd have to find someone I could walk around and point out what's weed and what's plant and what to pull up and not pull up and it would cost a fortune. I was 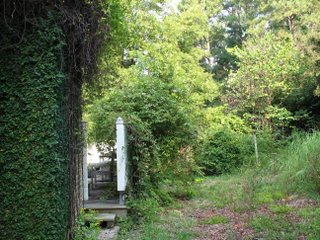 planning on waiting to see if anyone calls me about my PET/CT scan which is doubtful. Usually I have an appointment scheduled right after a scan or I have been told to call the NP for the results the day after a scan. This time I didn't have any instructions about the scan but I am scheduled for the lump excision (supposed lipoma) on my back September 19. I had originaly thought I would just wait and see if they called and if they didn't I might call medical records and see if they will fax me the report. I don't want to drive to Chapel Hill and pick it up if I can avoid it but I am more impatient to know something than I thought I would be. I'm also not sure if they will call if something shows up. I'm already scheduled to have the issue on my back removed so they may not want to call and say it lit up if it did since the final determinant will be t 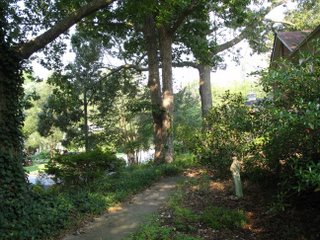 he pathology after the excision. If my groin lit up more than the last scan, they may want to wait and discuss that with me when I'm there because I'm coming anyway for surgery. I'm not even sure they'd call in advance of the planned excision if something new lit up. Rather than agonize over all of that, what I should probably do is call them Monday. A plan is always good even if I change my mind.
Posted by Carver at 11:27 AM

Carver, I love your garden. I hope the lawn nazis leave you alone and don't sic the city on you.

We have very little lawn, just the front yard and a small-ish area in the back for the kids to play, the rest is a field of wildflowers and grasses going back as far as the eye can see to a creek then a small wooded area. Jim mows a path back there for the kids to go exploring.

I wouldn't be able to wait for the results either, calling on Monday sounds reasonable to me.

I wish you the best and am thinking of you as you face this next round of surgery.