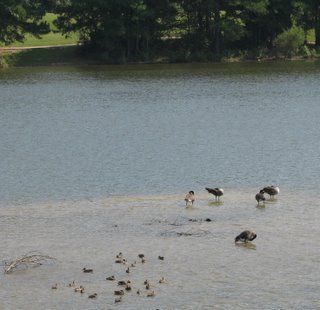 I went on a photo walk this afternoon. That's the great thing about fall weather. I was able to take a break from work and walk in the afternoon without it being too hot. There was only sporadic fall color, as it will be several weeks before more than a scattering of trees are changing colors in the NC piedmont but the process has begun which is enough for me at the moment. I drove the mile or so up the road to the lake instead of walking there as I used to. I had the bright idea that I would drive and park at the far end where the arts center is since I wasn't walking and I would start my stroll from that end for a change. It didn't really hit me until I was walking back to may car after my photo walk that those nice downhill steps were now being turned uphill. I'll call that a brunette moment of the 1st degree. It wasn' 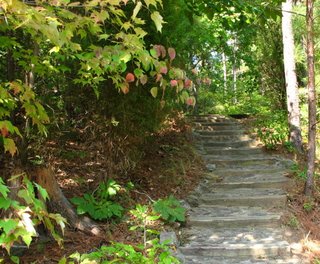 t that bad but the whole time I was walking, I was so smug as I thought to myself: cool, I don't have to walk home, I just have to turn around and walk to my car. The only issue was that I was pretty tired by the time I got to the steps that lead up through the woods to the art center parking lot. Not a long distance at all but stairs and hills have become my weak point and I was mostly embarrassed because I felt like I must have looked about 80 as I slowly walked up the steps. Who cares. It's not like it's a competition. I'll either get stronger and better or adjust to slow. I'm sure I'll get over it. The hard part for me is no matter what I've weighed, what kind of shape I've been in, I've always moved fast. That is an adjustment for me but one I'm slowly but sur 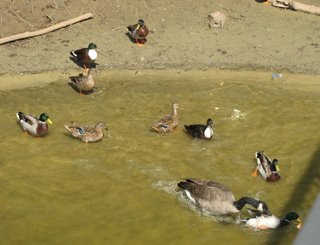 ely making, pun intended. I'm still ending up with a lot of photographs that get away. Perhaps the most interesting photograph I didn't get today was a humongous turtle sunning on a rock. I got it set up perfectly. I had to take it through the trees and get in just the right spot so the light was good and also be careful not to lose my footing and, drum roll, I snapped the picture right when the turtle grew tired of posing or perhaps was a little sun burned and dove into the water. Oh well. I will hopefully get better at this as time goes on. I am justifying taking another break from work this afternoon to post these pictures because I will try to work as much as possible tonight. I have physical therapy tomorrow m 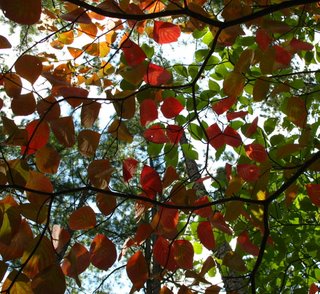 orning and would like to be caught up enough so I only need to get a little work done in the morning before P.T. I guess it doesn't matter since I'm sure I'll end up working this weekend. I am so lucky to be able to work from home and to an extent set my own hours as long as I get the hours in. I didn't mind driving to my office this morning to pick up some materials I needed because it was a pleasant drive. Hard to believe I used to make that drive every morning and afternoon. It's not that it's that far to my office as far as commutes go. I know plenty of people have well over an hour, sometimes two hour drives to work in rush hour traffic. It's only about my being so accustomed to being able to get out of bed and go straight to my computer and work off and on through the day and evening. I'm not sure with the chronic pain and neurological s 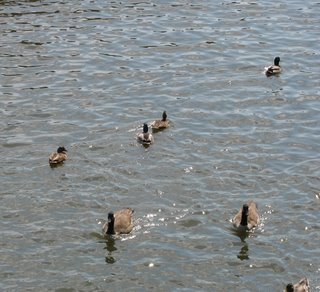 ymptoms I've had for 16 months if I could have continued working full time, if I had to commute. I know there are plenty of people with worse problems than mine who have active cancer and somehow keep working under much harder conditions than mine. I have the utmost respect for people who can keep going even when it must seem impossible to. I often feel like a total wimp. I know I've mentioned this before on my blog but that's how I feel sometimes but it's counterproductive to dwell on it. I think it has to boil down to what I'm going to do with my good fortune. I am like a broken record but it keeps coming back to one foot in front of the other and trying to move forwards. It's about finding a new rhythm whether or not I get significantly better than I am right this minute. What I have right this minute is a lot.
Posted by Carver at 3:19 PM

I love your pictures from today! Ducks are my favorite animals and you really took some cute ones of them! I can't believe the red leaves you have, too! We don't have red leaves yet that I've seen here in MD.

-LF/Lisa -- an occasional poster on MPIP who really appreciates your replies!

I can't tell you how happy I am that your lump was benign. It's also good to see you moving around, you're inspiring me to try my luck today. It's a beautiful day, the fall colors are really coming in here in NY. I might just put Jamie in the car and see where we can find to walk.

don't feel guilty about work. i think some people that go back to work thru thick and thin do so because they don't know who they are outside of work and they feel lost without out. it's often not a sign of strength, but a sign of a person without a real life. of course, i'm generalizing, but i really do think that is the case with some people!

personally, i admit that i enjoy not working, i have many interests and things that I would rather do, and i try not to feel guilty for not being there. there is so much more to life than our jobs, as you know, but some people need the distraction. i'm not one of those people.

i like your pics, i think it's time i go to the park and look at the fall leaves myself.