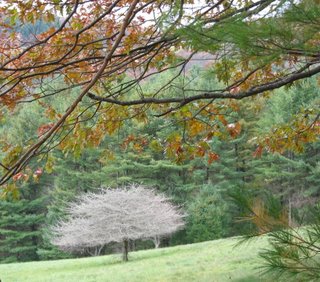 It was great to get out of town for the weekend and head up to the mountains with Bill. We have always enjoyed going to the mountains together, even before we were romantically involved back in the late 1970s. Amazing that after all these years and with a little thing like being divorced from each other, we can still enjoy going to the mountains together. I had hoped to make it to the MPIP gathering in Texas when it was being planned but due to the combination of finances and not being ready to travel alone it ended up not being realistic for me. Conincidentally it was on Bill's birthday and we ended up going to the Blowing Rock, NC which is in the northern part of the NC mountains. Mother's day weekend we went to Linville Gorge which is in the southern NC mountain 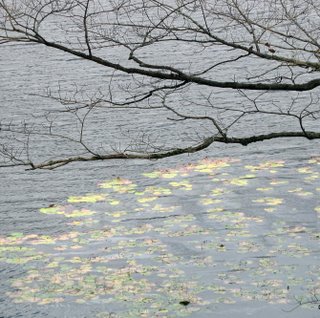 s so it was nice to hit both ends of the range this year. My mother is from Boone which is in the valley just a few miles below Blowing Rock. I always feel close to my mom in an odd way when I'm in the mountains. She died in 1990 and its hard to believe that's been 16 years. Even more amazing in a way is the fact that her mother is still alive at 102 or so. My grandmother isn't expected to make it much longer but I find it hard to believe. She keeps defying all the odds. Life is so strange. My mother's father was in his 20s when he died, my mother was 65, and her mother has passed the 100 mark. None of it makes any sense. I was encouraged on the way to Blowing Rock with how much better I traveled than the last time we went to the mountains. In general it took a lot less out of me to be in a car for hours at a time. We stopped once to eat but that was it. I think during the other trips 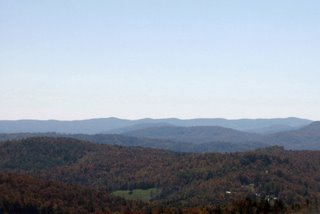 I've made since my chronic junk started, I had to stop every hour or so. Progress. On the way home, I didn't travel quite as well. It was fine but I was pretty unsteady when I first got out of the car. I would like to get to the point where I'm secure enough to go on a trip by myself but I'm not there yet. It's more fun with Bill anyway but I mean to go on a trip like the one in Texas which wouldn't be the kind of thing he'd be likely to want to do. I think that it will take time for me to build my confidence back up. I know I'm a wimp and don't feel all that apologetic about it. If I start comparing myself to some of t 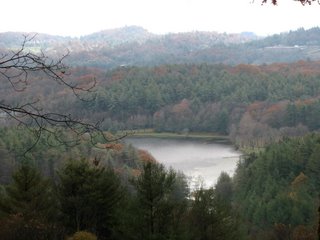 hese brave people I've gotten to know through the MPIP, I will always feel like I'm lacking in courage and resilience but everyone is different. I can only do the best I can. At the moment being able to go on moderate hikes with Bill in the mountains is a big accomplishment. Starting in late July and through August I had a set back and could barely walk around the block for a while. I'm back to being able to go on slow hikes which is great. I'm not completely sure that I'm cancer free but I'm more philisophical about it. The little things which keep lighting up aren't enough to concern my doctor and I'm not worried enough to get a second opinion so I need to focus on how fortunat 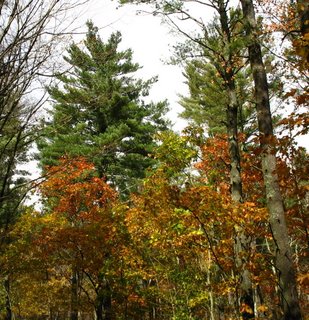 e I am. One thing I do know about my melanoma is that it's remarkably slow and my body is good at fighting it. Nodular melanoma is one of the most agressive kinds and mine was very deep but I'm still here. My body is doing something right and has been for a long time or I wouldn't have survived the first dermatologist I saw in the 1980 saying my melanoma was nothing and not even removing and biopsying it. When I think about what it would have been like if he had removed it and I had been diagnosed with melanoma when I was pregnant, I can't be all that angry with him. My prognosis would have been better if I had been diagnosed before it got so deep and spread to a lymph node but I would have had the fears of getting a cancer diagnosis while I was pregnant. Who knows how the stress of that would have affected my ability to reject the cancer. In effect, that's what must have happened. My body rejects the cancer and hopefully will keep doing so.
Posted by Carver at 8:47 AM

Carver, your pictures are just breathtaking...They are so beautiful; I am in awe of your picture taking talent!
I just hate so much to hear that you are dealing with so many post groin node dissection complications and wish so much that it all would get easier for you. So glad you had a wonderful mountain trip this weekend. You deserve it!
Sending lots of good wishes~
Shannon

The pictures are so great,keep them coming. Makes me want to take a trip!!! The midwest has some lovely falls but this year was a little drab..the parts I have seen.
It sounds like you had a nice weekend.

Is that a photo of Cone Lake? If not, it sure looks similar!

Thanks for sharing Fall in the Boone/Blowing Rock area. Happy to read that you were able to hike around a little. THat's wonderful.