Bobbing for apples anyone? 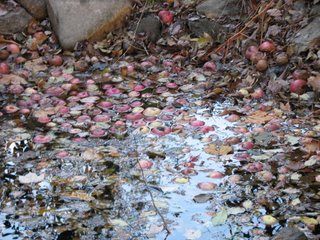 I was struck by the waste of an apple harvest which landed in the water at the memorial garden in the Blowing Rock Park. It was amazing how many apples there were rotting in the garden pool and lying on the ground. My attitude about that is that if animals get a harvest before the humans do then it's not wasted; but if neither humans or animals get it and it's not in an area where it will become compost over time, then it seems like a huge waste to me. I guess the insects and other small feeders my get some nutrition but this time of year there aren't so many of them either in cooler climates. I have a similar s 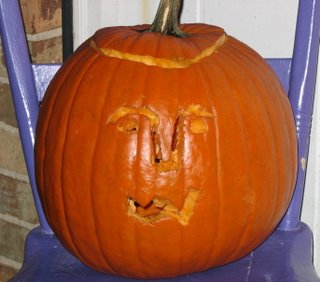 ituation in my neighborhood with plum and cherry trees that drop their harvest which is often not collected. I have to be quick to beat the animals to my pecans in the fall and blueberries in the summer. I have a volunteer cherry tree, for that matter several more small ones, but so far no cherries. I'm keeping an eye out though. I carved a funky pumpkin yesterday. Not one of my better efforts but it will announce to the neighborhood children that I am one of the treaters. My big challenge is to avoid eating all the halloween candy before the children begin to ring my bell tonight. Last year I used a fake pumpkin for my first time ever but since I couldn't find it anywhere, I ended up carving one again this year.
Posted by Carver at 9:28 AM

I'm bummed..we are all set for trick or treat tonight and realized it's the last night of a class we are taking and really want to go. Thinking about leaving the candy on the little table out front and hope the kids are curtious to each other..what do ya think. Well, however it works out I'm going to try to keep grubby hands out of the bowl. My favorites are in there too...butterfingers, snickers, all the good stuff..I hid the bag and now have to go looking for it...thanks for the reminder. Have a great evening. sue