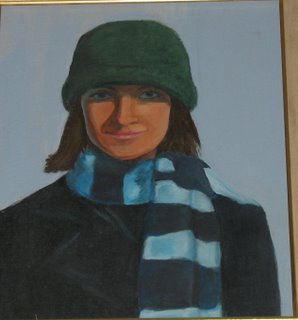 Someone suggested that I should post some of the portraits my father did of me so here goes. My dad was an episcopal minister but he also painted off and on through the years when he had time. When I was younger I would sit for him but as I got older it wasn't easy to get me to sit still so he would do a combination of painting from photographs and then get me to sit for the finishing touches. He also painted portraits of his other children, of course, but since I ended up with the ones of me, I have a lot of paintings of me, me, me. I hung a few but even my healthy ego isn't quite up to a gallery of paintings of myself in my house. I always liked the one I'm posting first and I also like the photograph of me and my brother which is what he used to start the painting. I think he originally tried to do it of me and my brother but that didn't work so he did this one of me alone. Perhaps my favorite one that my dad did of me is the rather primitive 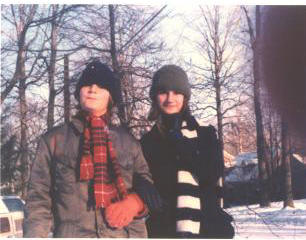 one when I was 8 years old. I sat for that one. The photo underneath the little elfish me is what I always call my flower child photo. I was a few years older than I was in the painting but the funny part is that in some ways the painting looks more like me and is less affected than the photograph where I'm clearly trying to look pensive or wistful or something or another. The little elf my Dad caught in the painting is more how I look back on myself as a child where the flower child in the photograph is more how I wanted to look. Too bizarre. How can a photograph be more staged in retrospect than a painting. After my Dad retired he took art classes. He even went to Italy for classes as well as for the travel. I have a 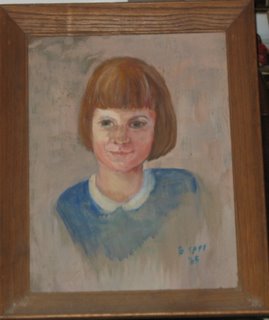 large painting that he started from photographs he took in Italy as well as from some sketches but he never finished it. He also took art classes at the community art center which is located at the park where I walk. As a matter of fact, that community art center is nestled in the trees and is at the top of the steps I photographed and included in a prior blog entry. They offer a variety of art class as well as yoga, tai chi, photography, and crafts courses. I should look into taking the one they offer in digital photography. I took a chi gung class there before my melanoma dx and enjoyed it a lot. I hope I can do something like that again when I get through all the physical therapy I'm doing. Today was a light lymphedema massage and it was weird. My leg felt twice as heavy at the end of it as it felt before. They want me to start wearing bicycle shorts or running tights after the lymphedema massage as well as when I walk. They want to see how much that helps to decide if I need a compression garment. My next 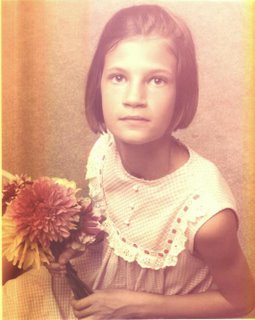 session this week will be in the pool and will be for lymphedema as well as for the frozen shoulder. Friday will mostly be working on my shoulder. It's so odd how my LND was on my left groin and at this point I do have a mild case of lymphedema but my right shoulder is almost worse. I go to the rheumatologist this week and will find out about some of the additional testing he did which may provide answers to some of the rest of the puzzle. It's still blowing my mind that he found out I had a vitamin D deficiency which explains the bone pain and balance issues. I think the mega dose of prescription vitamin D I'm taking has already begun to help. The charcoal my Dad did of me was when I was waiting for my ride to a new year's eve party when I was in high school. He painted that one around 1972. It is so cliche to talk about time flying by but sometimes I look at mothers in the park with their babies and am shocked that they are not much older than my baby. It's funny how wistful I feel too. It's not that I actually want to go 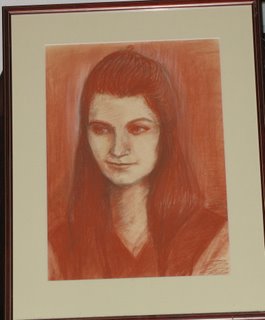 back. I certainly am not one of these people who would ever tell a young person, these are the best days of your life, because I don't feel like that about it. I know when that sentiment was expressed to me as a child it made me panic because if that was as good as it was going to get, I didn't want any part of it. I didn't think that was as good as it gets and it wasn't. In so many ways life is easier for me now than it's ever been. I enjoy it more even with all the irritants that have come my way recently from health problems. There is so much to enjoy on a daily basis. Sights, sounds, colors, smells. I lose it every now and then but in general I don't have anything to prove to anyone. That is such a released feeling. Looking back on my childhood I can appreciate the fact that I grew up in a loving family and had so many opportunities but as a child it was hard to see what I did have. That didn't make me a bad person or an ungrateful person. It was simply the way it was. I was reading the newspaper recently and they had an article about 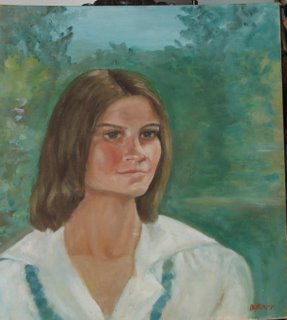 the Monet exhibit which will be at the NC art museum and the first thing I thought was, I need to call Daddy and see if he wants to go with me. Too bizarre. My Dad died in 1998 and here I am in 2006 thinking I should call him up and see if he wants to go to an art exhibit with me. I remember going to the old NC art museum when it was downtown, as a child, with my father. He went there sometimes during lunch because the church where he as a rector was just a block from the museum. Later they moved the museum to another site where they have room for an outdoor ampitheatre and an outdoor art walk. It's much bigger than the old downtown museum and quite nice but I miss the old one. I can picture myself as a child walking through the museum with my dad. I also remember trips to Washington when we went to the Smithsonian. That complex fascinated me. My dad went to Virginia Theological Seminary in Alexandria before I was born but he would go back for sabbitical courses sometimes and we 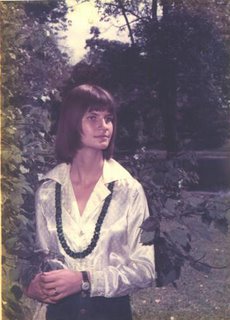 went to the DC area fairly often when I was growing up, or that's my recollection of it. The funny thing is when my husband and I took our daughter to DC as a child all she wanted to do was play in a little park near our hotel. We set off to go to the Smithsonian and she spied that park and that was her place. She did the same thing around that same age when we took her to NYC to visit my sister who lives there. She loved this rope swing in central park and wasn't particularly interested in going to the Metropolitan Museum of Art. Of course she was only 5 or so. She did like the Boston children's museum where we went when we spent the night in Boston on the way to visit my other sister in Nantucket. The last two pictures are of yet another portrait my Dad did of me followed by the photograph he worked from. So this concludes the me, me, me blog.
Posted by Carver at 6:16 PM

Hey you classic beauty, you :) I had not seen the one with the flower before--that's really nice. He was very talented.

Glad the vitamin D is already beginning to kick in. Cheers, Jocelyn

The portraits are amazing, you're so lucky to have them. What a wonderful piece of your father... My father died when I was 15 and I still think about him most days - especially now.

I'm glad the vitamin D seems to be helping and, as always, hoping for the best for you.