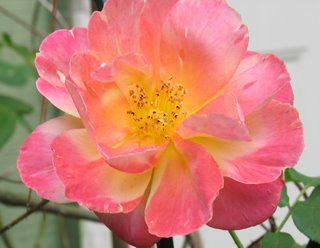 I went outside to snap pictures of the late bloomers and found all sorts of surprises. Kale, carrots, and broccoli have volunteered from past crops and are growing like crazy. I'll have to pick some kale and freeze it for when my daughter is home Thanksgiving. She loves kale. The wildest part of my outside adventure today was how I practicaly tripped over the birds. I couldn't believe how many there were. Everytime I go outside lately, it seems like they've multiplied. I didn't get any particularly good photographs of the birds, but that hasn't stopped me from posting them yet, so why start now. They seem to know that I'm not a big threat. However, they aren't quite 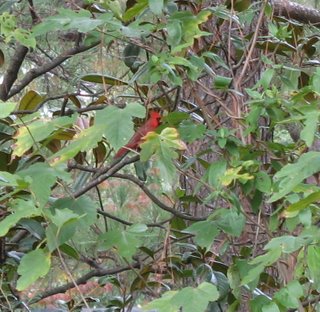 as cooperative as the flowers. Hopefully in time I'll get better at it. I'm still hoping to get a shot of the blue heron at Shelly Lake. Now that would be an accomplishment. I do enjoy the way the cardinal ends up looking like a red leaf or flower. Sometimes from a distance I actually think the cardinals are flowers. Pretty wild how the males are so much more showy than the females. I guess that's true with so many animals in nature. I see more and more color in the trees on a daily basis. I love the way everything is changing. Change has always been something that I like. So odd how I never move, but I love change so much. I always believed that every school year would be better as a child and I still have something of that in me as an adult. New year, new season, new hope. I don't think that I could handle being a pessimist. Even when I try to be pessimistic, it 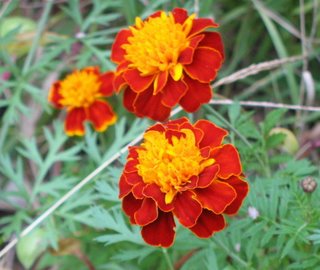 doesn't work for me. I know people who do seem to do well with a fatalistic attitude and sometimes I even try to adopt that attitude to avoid disappointment but it doesn't work for me. Ultimately I have to come back around to being optimistic. Hoping for the best but expecting the worse to avoid disappointment sounds good on paper. I know people who do adopt that as their modus operandis but it doesn't work for me. I have to believe that life will get better and better and if it doesn't work out like that, I believe it will be better than what it is right now. It's not even about it being particularly bad. My life is good in most regards. I don't need or want much more than what I have, but I have to see the changes around the c 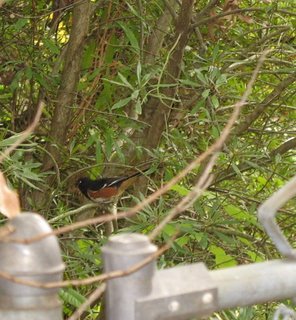 orner as being good ones. At least I've stopped wondering what I'll be when I grow up. I seriously wondered about that until I was in my mid 40s but somewhere along the line I figured out that we don't magically become somebody, and that whoever we are is seldom as simple as the means by which we earn a living. At this point I'm mostly grateful that my employer lets me work from my computer at home and provides me with good health insurance. The perk of being able to take a photo break in the middle of the day is pretty cool, in and of its self. If I still commuted to work, I'd be able to take a break and photograph the birds that hang out around the office building. Sometimes I think it might be better for me if I did go to the office more but everything would be harder. It's hard for me to sit in one place for long periods so it's a great advantage to be able to spread the work day out over the day and evening from the comfort of home.
Posted by Carver at 6:59 PM

I wish I had known about a site like this one or the one like Jackiedoss when we were on our journey with Sammy...altho, I remained optimistic, many others did not and it would have been so helpful to have been able to read and be contact with those that were..everyone was (most everyone) extremely kind and generous to me on mpip but there were just times when I needed to hear something really positive...I always believed that we would conquer Sam's illness but, if not, then he would be in a heavenly place..I had never seen a hummingbird until the day of his service and just outside the huge stained glass window were several hummingbirds constantly pecking at the window as if to say, "he's ok" believe, he is ok. It was a tremendeous relief for me..haven't seen a hummingbird since...that was 2 years ago...I do believe he is ok in death. I choose to be positive, always. Thanks for sharing your insight. sue