I have been tagged by Miss Melanoma to list 8 random facts about myself. Lori requested that the people she tagged post random pictures in addition to the other rules of the game. I like random pictures so I'm following that rule. You are supposed to put all of the rules of the game at the beginning of your post. Which brings me to number 1 of my random facts about myself.

3- I went to a private elementary school which was owned by the Church where my Dad was the Rector. The 6th grade 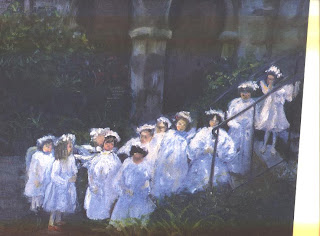 girls got to be angels in the Christmas Pageant. There weren't enough angel costumes for my class so the teacher asked the class to vote on the best behaved students and those with the most votes got to be angels. My best friend and I weren't going to get to be Angels until my Dad got wind of it and borrowed two costumes from another Church. Because we were tall for our age, we were able to wear adult size costumes from that Church which were showier than the others so we ended up 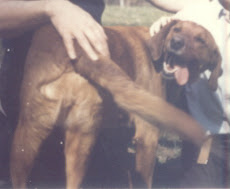 looking like lead angels. My Dad painted the angel's in waiting which I am including. The painting isn't cut off to the right, that's the photo I took of a print of it.

4 - When I was growing up we had a dog named Shannon who lived outside. One night during a storm, my brother and I went outside to sleep with Shannon in her dog house. We loved Shannon. Our parent thought we were very thoughtful but convinced up to come inside and as I recall Shannon was brought in to sleep on the screened in porch. 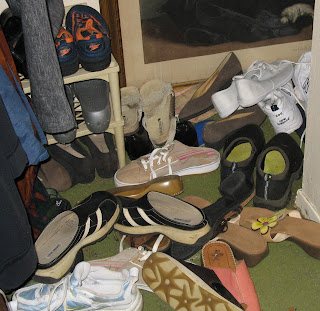 5 - I am pretty messy, even as an adult. Make that very messy. I am not entirely comfortable with how messy I am so I do try to straighten up from time to time. It's been a while since I organized my shoes.

6- I married the boy next door and our landlord let us knock a hole in the wall in between the studs between the two sides of our duplex. The first 5 years of my marriage we had two kitchens.

7 - One of the jobs I held when I took some time off from college was as the seamstress in a laundry. I got to let out the pants of the infamous Senator 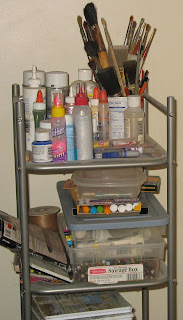 from NC, Jesse Helms. No it wasn't me who embroidered, I'm a jerk on his pants in thread which only showed up when he was being obnoxious.

8 - I like to draw, paint, scribble on blank paper in the style of a child. I still do this for fun and it's almost as much fun to laugh at what I've created and toss it in the recycle bin.

That's it folks, 8 random facts about me. If you are interested in finding out what the rules of the game are you can visit Miss Melanoma's site and view her post with her 8 random facts.

Thanks Lori. It was fun playing tag with you. Cheers, Carver

Angels in waiting...how profound!
Aren't we all just that?
I really love Angels and believe in them in spite of everything.
Love, K.

I saw the angel in the marble and carved until I set him free.
-Michelangelo di Buonarroti

Your Michelangelo quote made me a bit teary but in a good way. I liked the fact that my Dad's painting was printed and used for Christmas cards to raise money for FIGS.

From the printing on the back of one of the cards I have it says "proceeds from the sale of this card are used to provide food, clothing, shelter, heat and medical supplies to . . ." Certainly an impossible task but FIGS has done some good work.

It meant a lot to my Dad when a woman who lived in Paris (France that is not GA) wrote to let him know that she received one of the cards and admired the art. The funny thing was the card listed him as a artist and where he lived, not mentioning that he was a clergyman. It meant a lot to him to get "fan" mail from someone who thought of him as an artist and not as that Episcopal priest that paints a little.

I thoroughly enjoyed each of your random entries. I can't imagine any Brownie leader being so cruel as to kick you out of the troop! She must have been one uptight lady!! Really, she didn't know creativity and originality when it was right in front of her!!

It is pretty amazing how tough that brownie leader (teacher) was but that was around 1962 and was at the private school I went to. The brownies met in the school cafeteria after hours. A lot of the older anachronistic teachers didn't like my Dad because he was trying to bring the school into the 20th century and I was an easy target for their anxt. As the Rector of the Church that owned the school back then, he was also the head of the school board. Oh well, ancient history. Take care, Carver