The azaleas in my front yard have quickly produced their full colorful array of flowers. 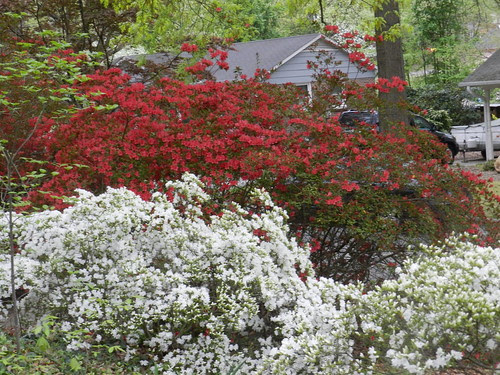 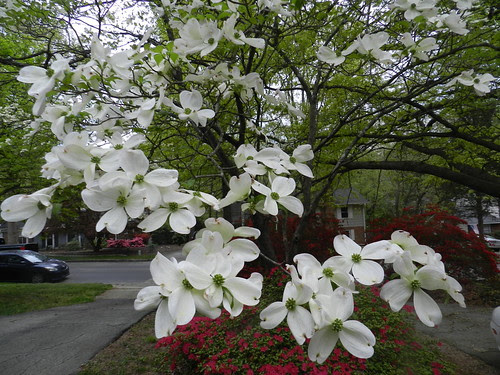 My side and backyard azaleas are slower so I'll be posting shots of them later on. 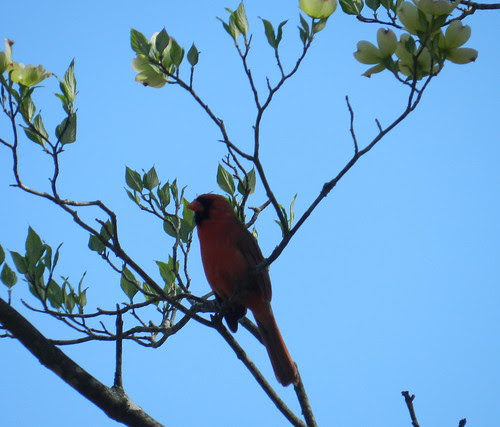 The male cardinal above was singing in the dogwood treetop and the mockingbird below was warning people and animals away from her nest which is hidden in an overgrown azalea. 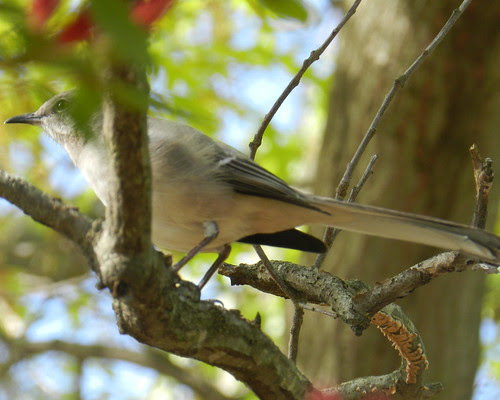 A new culvert was installed at one of my walking places and with spring newly seeded grass and trees around it are coming to life. 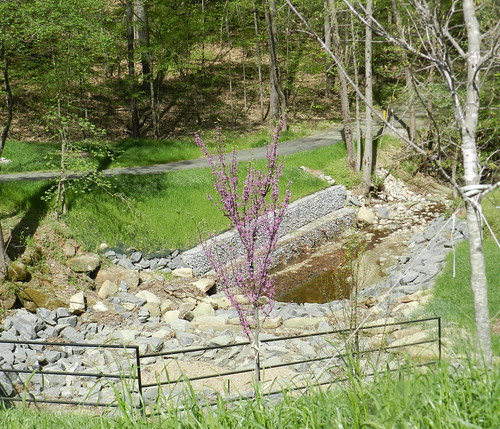 Many of the trees on the path leading to Shelley Lake are already leafing out. 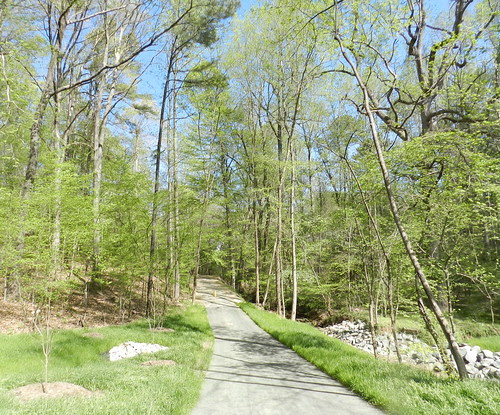 The Canadian Geese explored a large puddle in the grassy field across the path from the lake. 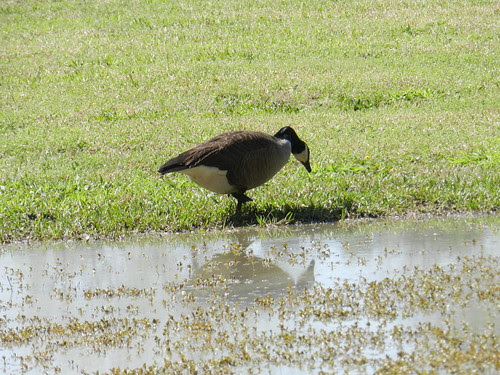 The lake looks clear on this side but it's very different on the other side of the bridge. 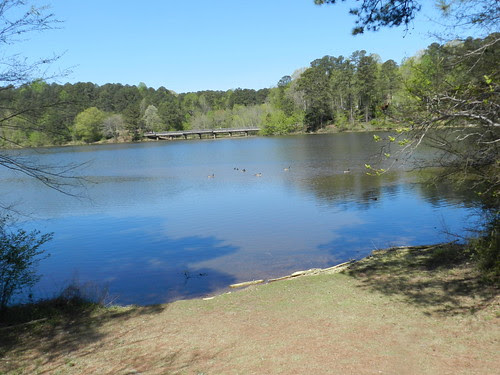 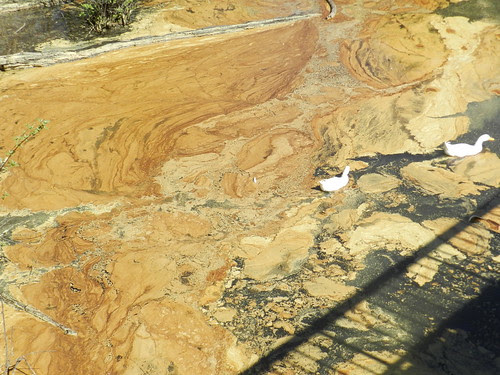 It's wild to me how the pollen all accumulated along the bank on that side of the bridge. 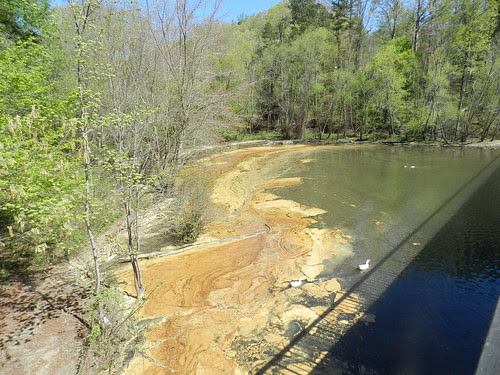 The gulls always leave this lake in the spring to nest somewhere else but there was one solitary gull that stayed behind and was hanging out with one of the Canadian Geese. 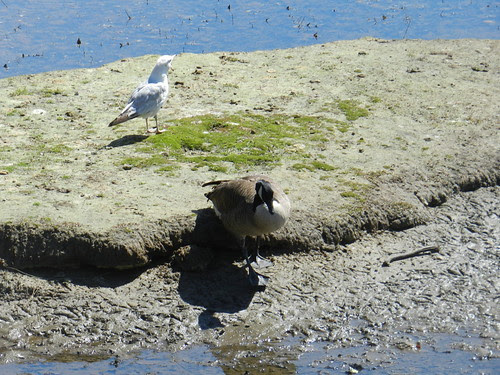 On my deck the bluejay was enjoying a bath. 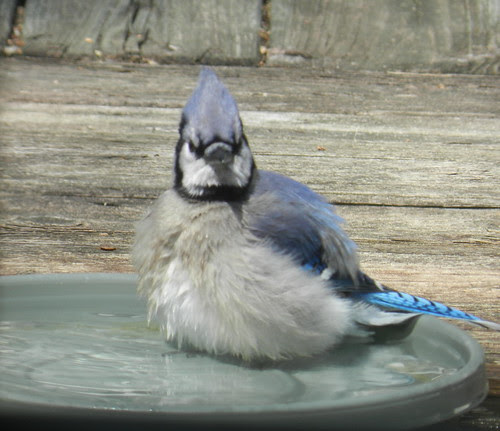 The male cardinal had the other bath and the American Robin was watching them. 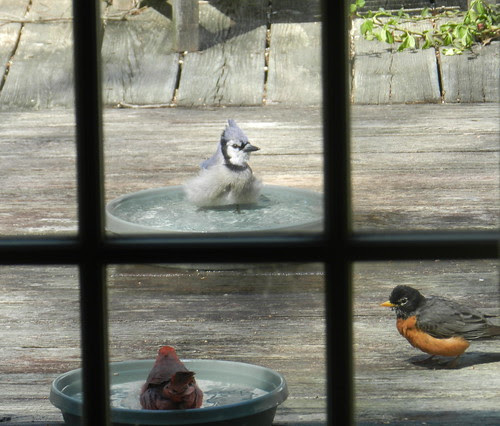 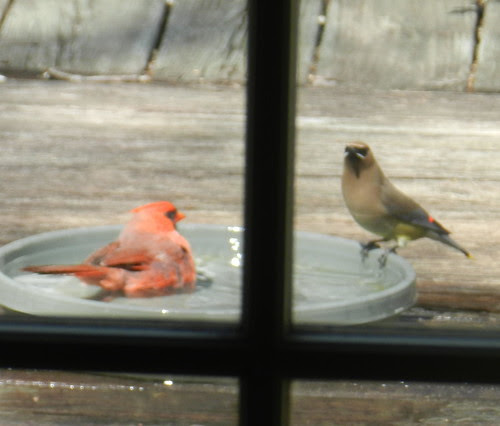 Click for the home of Nature Notes.
Posted by Carver at 1:12 PM

Lovely photos! That pollen is amazing and the photo of the robin watching the cardinal and blue jay is so sweet!

Finally, the world looks like i want it too. :) The pollen may be messy, but it makes great patterns. :)

I would not know that is pollen. The birds by your feeder seem happy together.

Oh man am I jealous of those blooming trees :) Ours are just starting to bud out now.

Thanks for the tour in your natural habitat! Lovely!
Wil, ABCW Team.

I'm happy when I come here to just look at your header shot. Seriously, it takes me a couple of minutes of gazing at that before I remember why I actually came. Beautiful spring.

Adorable set of pictures, I love azaleas, so beautiful and delicate flowers!
The nature there is splendid!
Léia

Wonderful azaleas and dogwoods. Ours here never flower so profusely due to permanent lack of water and scorching summer winds. Love your little birds too.
This must be a great time of year to take your daily walks with so much beauty around.