The heat is a factor for all living things in my neck of the woods (central NC) with record breaking highs. 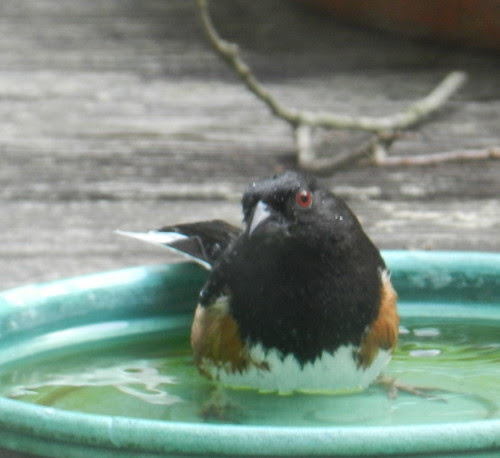 I believe it was our gracious nature notes host who gave me the tip last summer about adding ice cubes to the bird baths so I didn't have to change out the water as frequently during the hot days. 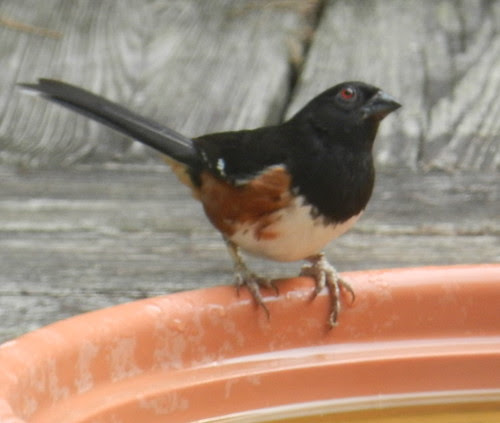 The birds and I would like to thank her for that good advise. 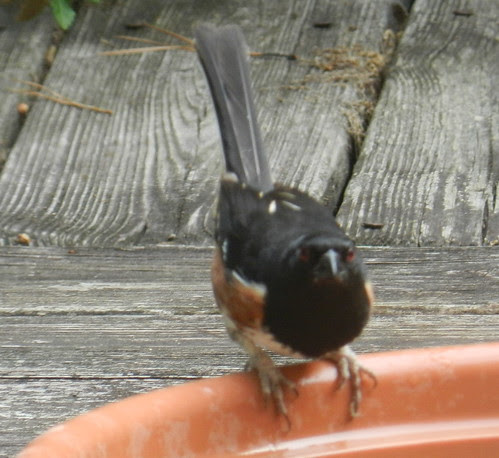 I still put in clean water at least once, usually twice a day but the ice cools it down during the hot part of the day and isn't as wasteful. I use the old bird water for plants but even so adding ice makes more sense during the heat of the day. 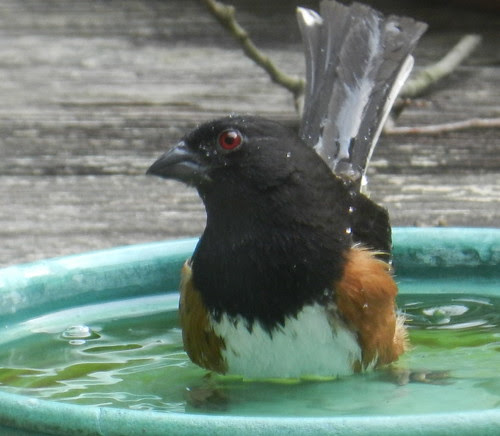 The first four shots are of the same rufous-sided towhee who was bath hopping between the two deck baths. 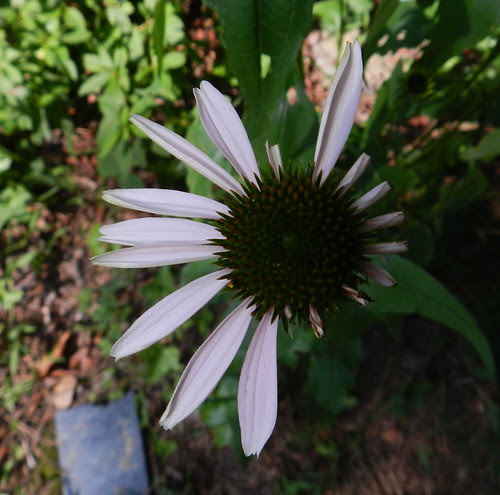 Something likes to eat the petals on the echinacea (coneflower). 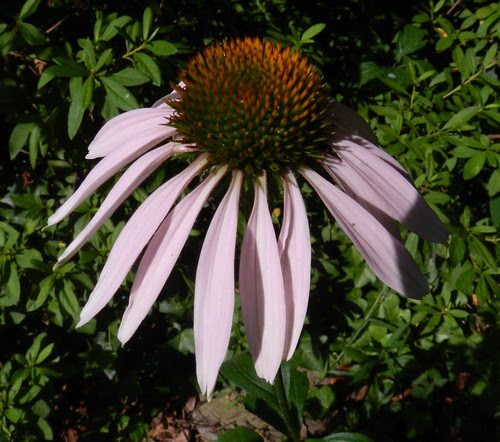 The shots of my coneflowers above were taken sometime last week before the heat cooked them as shown in the next shot. 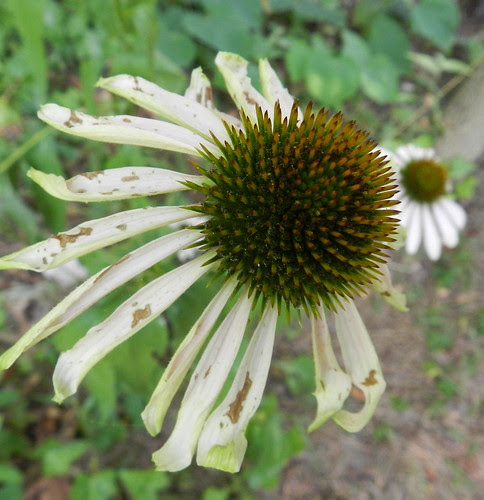 The bluejay below was hiding in a tree waiting for me to go inside before using the front yard bird bath. 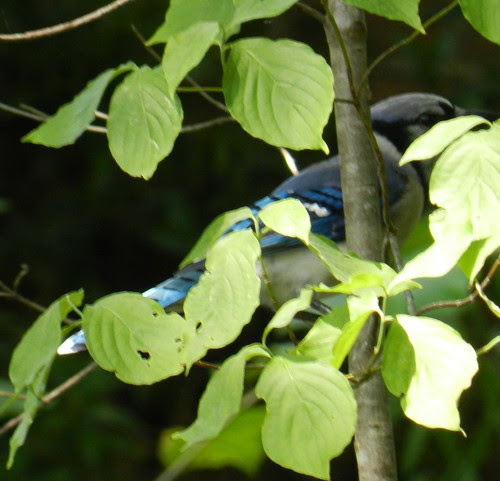 Today I got some shots of the bluejays using the deck bird baths. 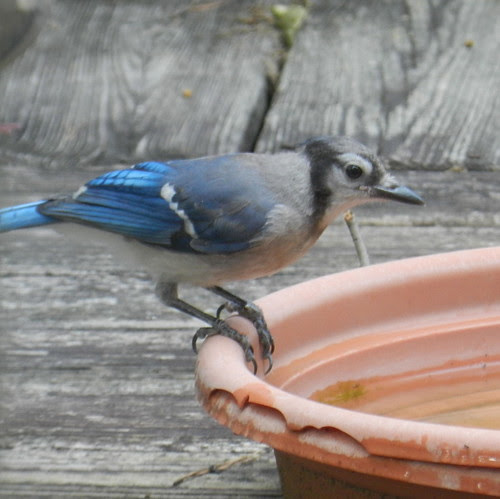 Although my deck bird baths are just old planter saucers, the birds like them and I'm able to have more than if I just had my concrete bird bath which is in the front yard. 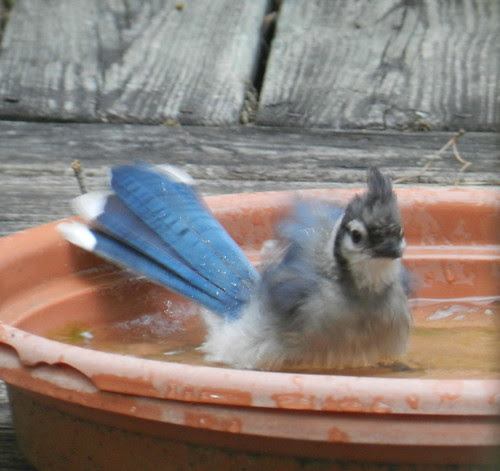 The birds don't care if it's an official bird bath or not. It's easier to photograph the deck bird baths because I do that through a glass door. 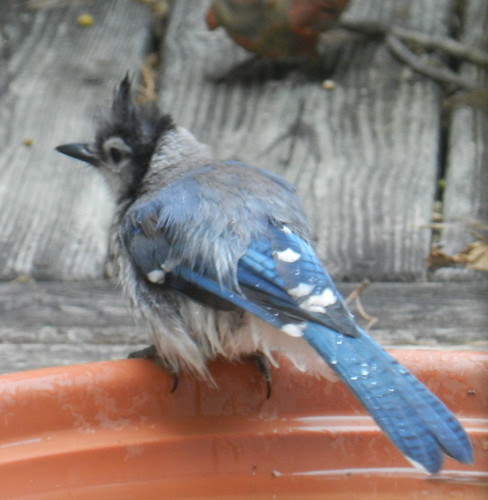 To give you an idea of what the heat is doing to my plants, below is a shot of one of my hydrangeas. 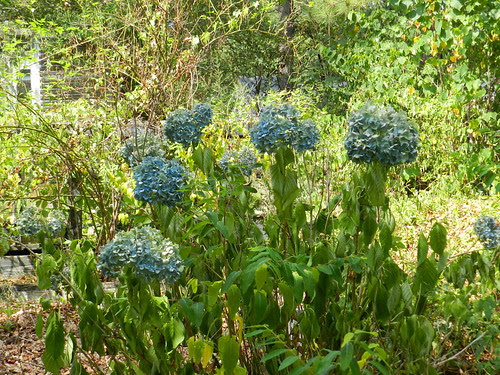 I thought the mourning doves looked like a couple of love doves. 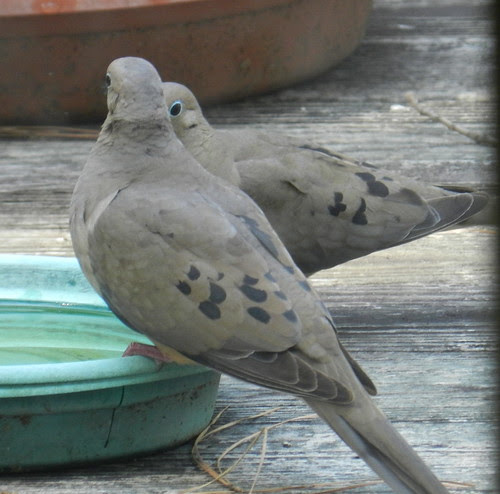 But it was too hot for all that togetherness. 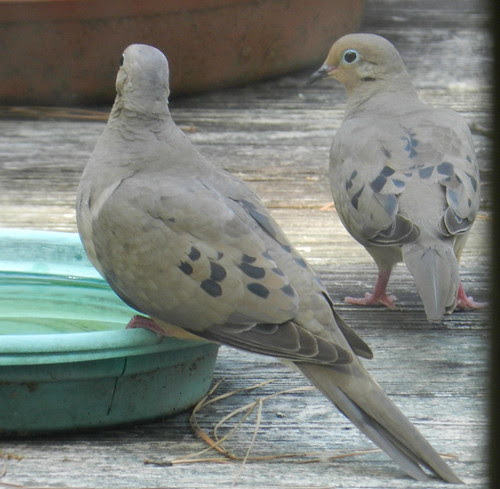 A catbird was enjoying bath hopping. 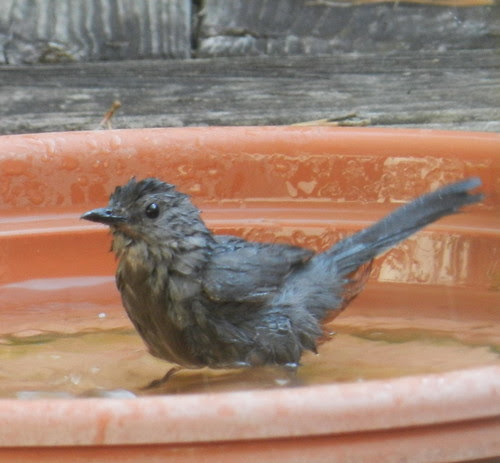 He started in the larger deck bath. 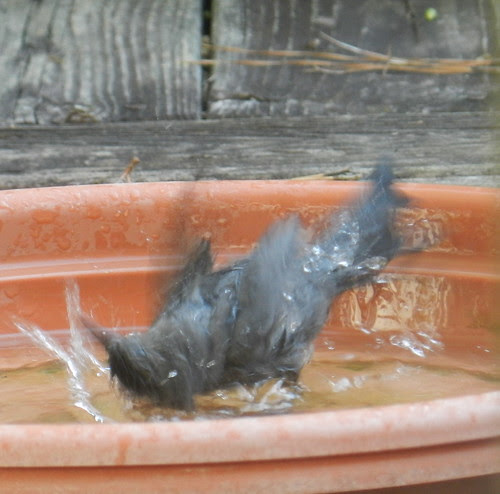 At first I thought he saw me and was getting out to fly away. 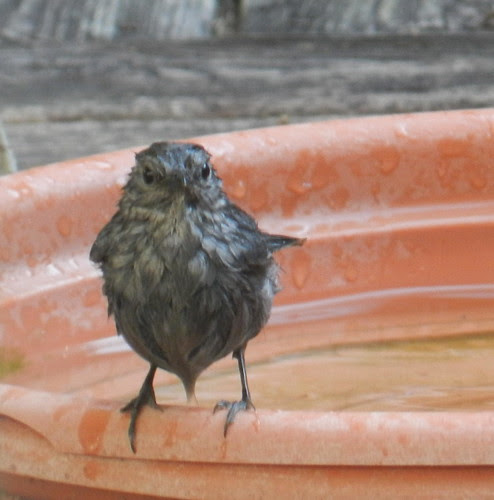 As it turned out he just wanted to check out the other bird bath. 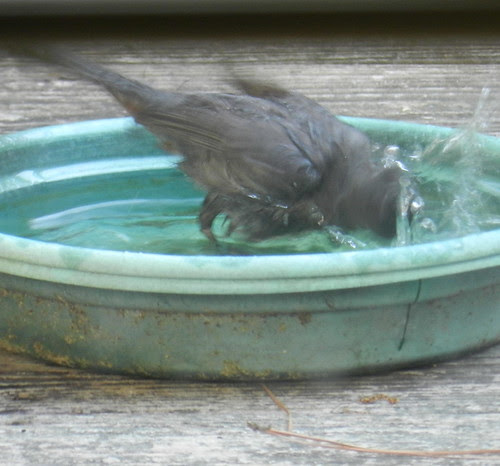 He moved suddenly and his head almost got outside the photo frame. 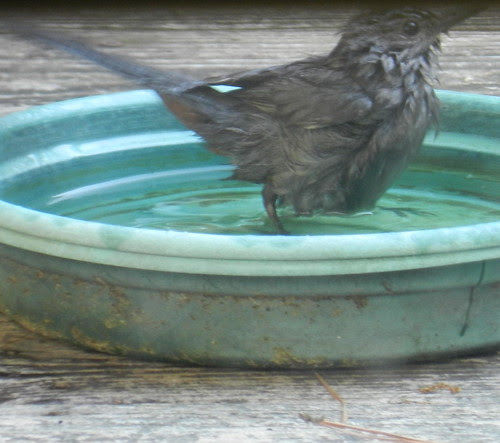 Below is another shot of heat damage. My poor lilies got fried before they even bloomed. 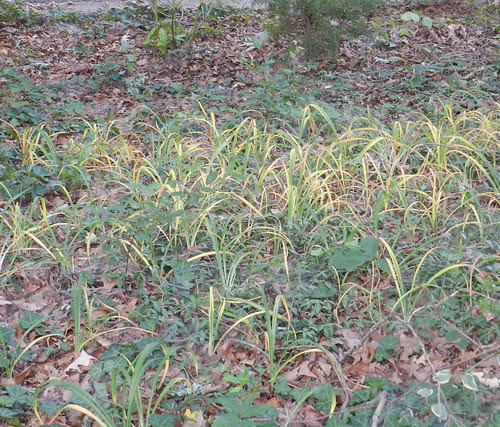 The American Robin was primping and preening. 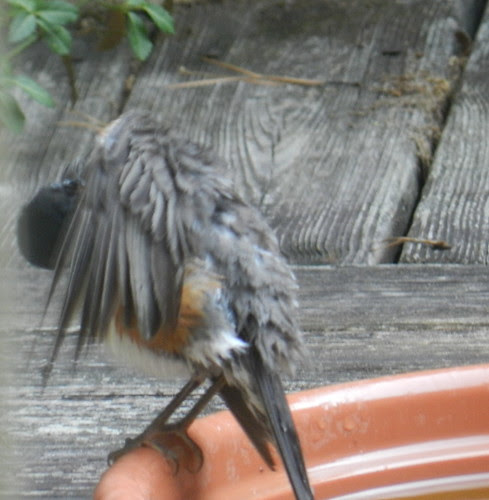 Her breast feathers match the bath. 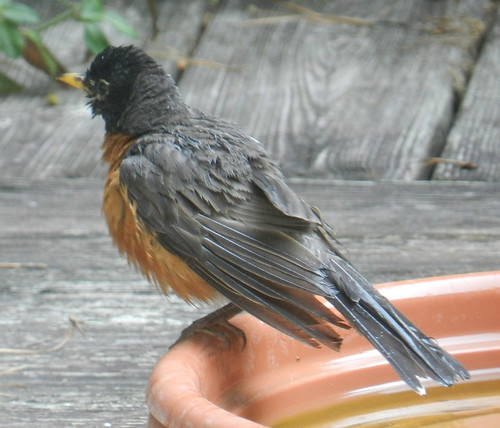 There are a lot of juvenile cardinals. 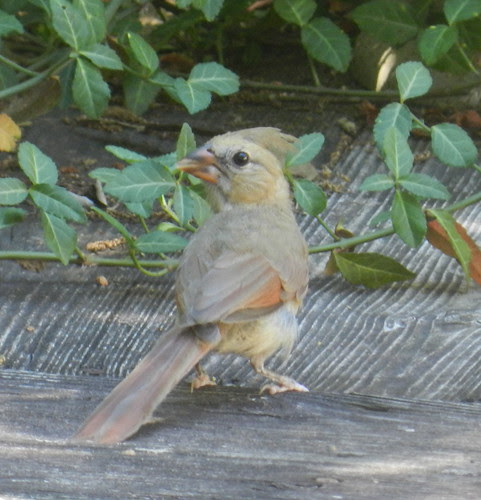 I enjoy seeing the immature birds this time of the year. 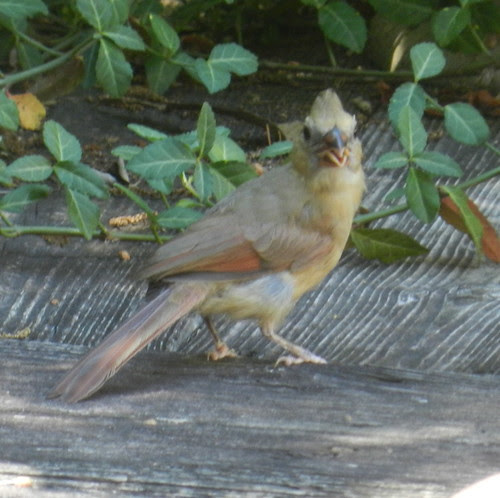 There is something very endearing to me about young of all species. 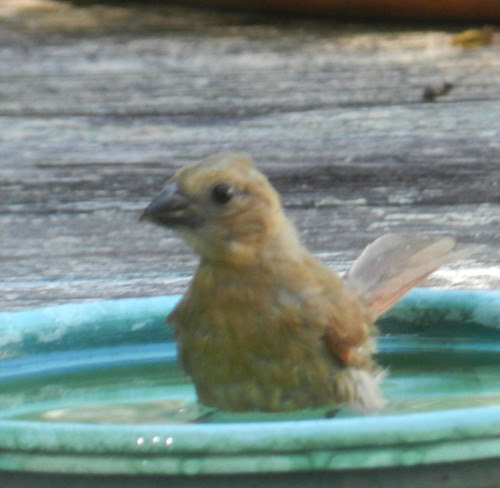 It's interesting how beaks on the cardinals are a different color when they are young. 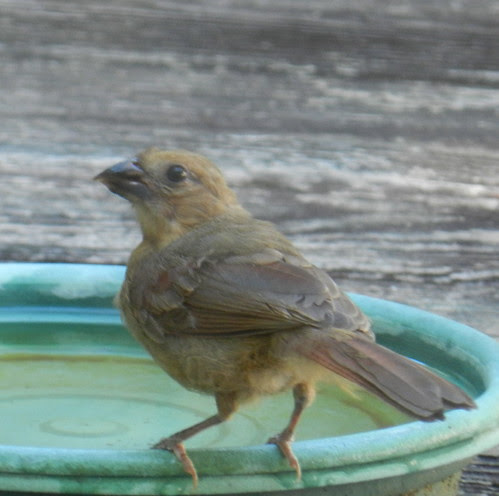 The next two cardinals are transitional or adult. 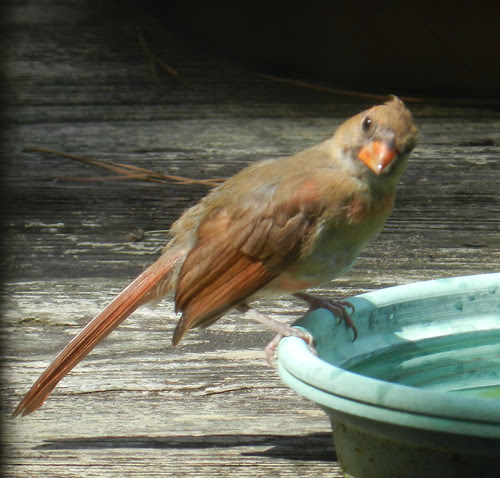 I like how soft the feathers on the next one look. 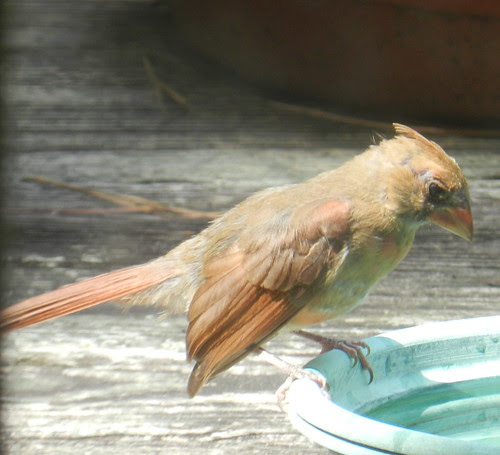 Carver, I always enjoy seeing your birds at the bath. My favorite is the silly catbird. Great series of photos.

I LOVE seeing the bird bath photos! The second to the last one where the bird is staring at us is classic! I love the blue jay too!

The ice cubes are SUCH a good idea!

So nice of you to add ice. They must appreciate the extra touch of coolness.

My daughter noticed chomps taken out of rudbeckia, sort of looks the way your echinacea does. I told her it was deer (we get those wandering by and gobbling bits of gardens when people aren't about).

The heat has been crazy. It's been like a blast furnace around here. I sure am glad you take caer of the birds the way you do.

I thought of you..my sister is outside of Richmond and she is struggling to clean up the property damage and to keep the horses cool. I don't think it was me who gave you the ice idea, but it is a good one.. I am so sorry that your yard is suffering as I am sure you are too..Michelle

I could use a dunk...Happy 4th to you, hope you had a wonderful day.

That towhee is just too cute moving from one cool bathtub to the other...and loving every minute of it, just like all your birds. Ice is a good idea as are the plant saucers (I will tell my Colorado kids).....The young birds are just adorable.

that rufous sided towhee is such a handsome bird. it's raining so much here, water is the one thing our birds are definitely getting enough of!

I love seeing the birds enjoying the water! The ice is a great suggestion.