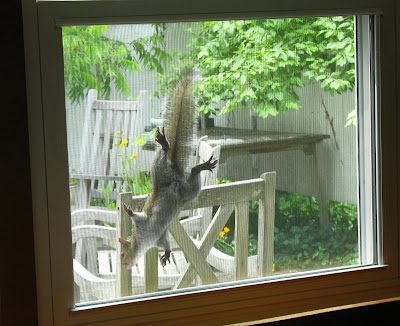 I posted a black and white shot of this crazy squirrel on my other blog for Wordless Wednesday but I decided his antics were deserving of a full post. Although, I'm not sure I want to encourage him. I guess it's ok since reading is probably not his strong suit. 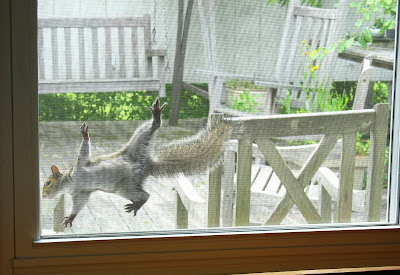 Imagine, if you will, me sitting at my computer working away minding my own business when BAM, I heard this load noise. I thought something must have fallen over so I stood up, turned around and BAM. This crazy teenage squirrel was banging on my window. He wasn't just clinging to the window screen he was playing on the screen. 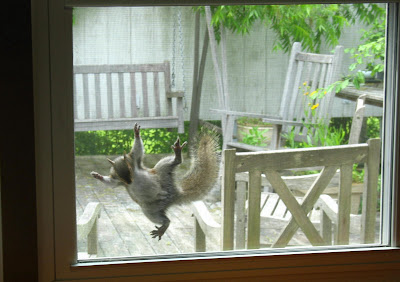 He scared me to death for that brief period of time until I realized he was just a crazy teenager. I grabbed my camera and caught him going one way and turning around and going another way. 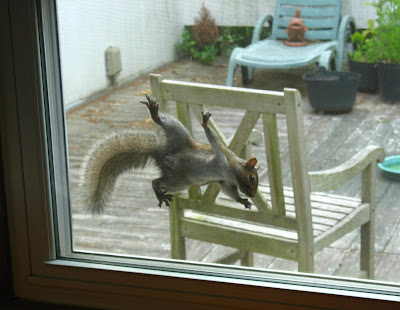 I think his mother must have called to him to come wash up for dinner because he finally hopped down and was on his way. 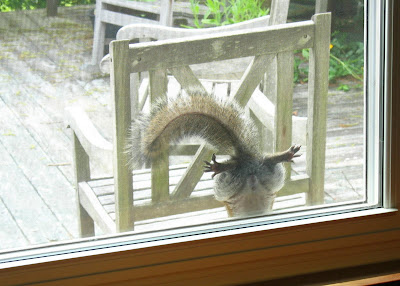 I think the part that still has me scratching my head was how he could maneuver on the screen like that and not tear it up. The window was shut which was why it was loud because with each maneuver he was banging into the window while holding onto the screen. So there you have it, a squirrel tale or is that tail.

Those are great photos....I don't see to many squirrels here.....guess the eagles, and hawks and the likes get to them first...when I lived on the mainland the squirrels where bountiful...grey ones with big bushy tales....I found the pesky...always getting the bird food before the birds....it's funny the antics they can get up to...

Great photos. We had a red squirrel who did that and it was ok for a while until it decided to bite right through the net. It just took one snap their teeth are so sharp. We then had to scare it off as it could get in any time the window was open.

Loved the tale (or tail!), great shots of the squirrel. Our don't come near the house, I watch them play on the pine trees.

Carver,
I love it that you are imagining that this was a teenage squirrel whose mother was telling him to come home and wash. Jeanne, Eddie, and I were watching some sea lions on the docks at the coast yesterday and they were barking off and on the whole time. So, we started imagining what they were saying to each other and to us.

That also reminds me of a story my uncle Edward (still alive) told me. It talks about the arbitrariness of hunting regulations. Anyway, he was at camp and near there, he saw a moose. Then, he heard on the radio that moose hunting season was going to start in two days or something. Then, two days later, there was no moose. His comment? "I think that moose heard the radio and decided to go and hide." And, then he chuckled. Works for me!

hahhahhaa.. Carver! Seems like that squirrel has found it's playground!! :)

Thanks to everyone for visiting. I agree with the comments that squirrels can be pesky at times although at this point I grow so much food for birds and squirrels that it's not like when I used to have feeders getting dumped out. I do have to fight the squirrels for my pecans, ha.

I hope they don't start tearing up my screens. This was my first sighting of one on the window. My fairly new windows have a half screen on the bottom half and it's outside of the window so I can't really protect it.

I bet that was fun watching the sea lions barking at each other an imagining what they say. As to the moose, they probably are being genetically altered to know the hunting season. I know that's not possible since stuff like that scientifically speaking takes longer than they've been having specific hunting seasons but I thought it sounded good, ha.

Hey Carver,
Maybe it's the pollutants in the environment that are altering them so that they know when hunting season starts! LOL

Yep, the sea lions were saying stuff like, "Hey, quit staring at me" (when they looked at us and barked) or "hey, I'm trying to sleep here!" and then to each other, it was "mom, he's sleeping on my side of the dock" or "move over, this is my spot" or "hey knock it off you guys, we're napping over here". It was fun.

Oh wow CarverFriend,
Yew weres so close to ketchin' that squrul! I haf been tryin' all my life to gets me one. Just 'member that yew shooldn't squeel when yew chase them. I hopes the neckts time he comes to hang owt at yer howse yew can gets him.
BTW, lemme know what yew do when yew catches him...all I know is that I 'sposed to ketch rodunts and shake 'em. I know 'bout the shakin' part 'cos I wonce cawt a pair of wabbit ear muffs that my Kim bowght by axident. My seester howuled at them, but i did the shakin'.
We may not be sutch gud hunters, but we are
Gud Dogz.
Luff to yew, AbbeyDog.

Dee your Sea lion conversation cracks me up.

AbbeyDog, thanks for visiting me. I'm afraid I'm too chicken to catch a squirrel. I need a ferocious beagle like you or your sister for that.

wow, lovely time and cature you have Carver :-) made me smile

We seem to have lots more squirrels around here this past year. But usually they just scurry along the fence and up and down the tree. Also, lots of cats that used to irritate me, but after seeing a rat scurry over my patio one day, I now cheer on the cats and in my mind am yelling, "Go get the rats, cats!"

Thanks to everyone for visiting.

Leslie, I'm the same way about cats. I didn't like the neighborhood cats coming to my garden until I realized they take care of the mice.

Top of the morning to you my friend Carver!
I dropped by to catch up reading your blog and was so PLEASED to see the squirrel shots (I love em)
I have 3 that visit their granola patty I set up just for them, I love their playful ways.
Think of you often, and hope you are doing well and LOVE the pics!
Thanks for starting my day perfect!
Hugs to my Mel sister!
Jane