After a brief reprieve with a mild Monday, the cold air came back full force on Tuesday. 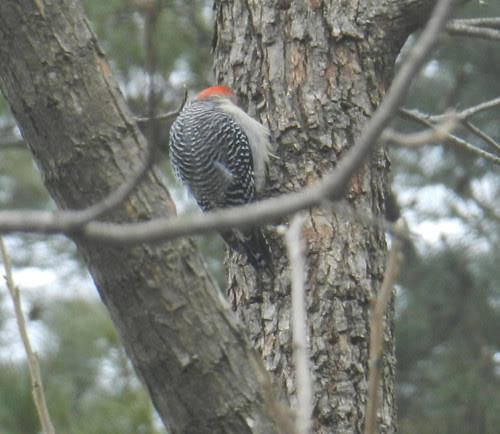 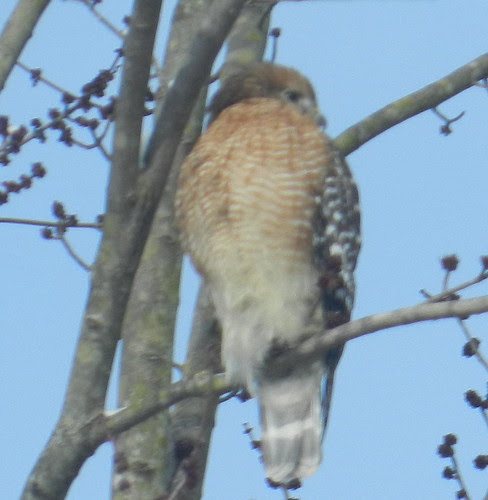 The mourning dove and possibly a grackle are eating seeds on my deck wall on Wednesday morning in the shot below. 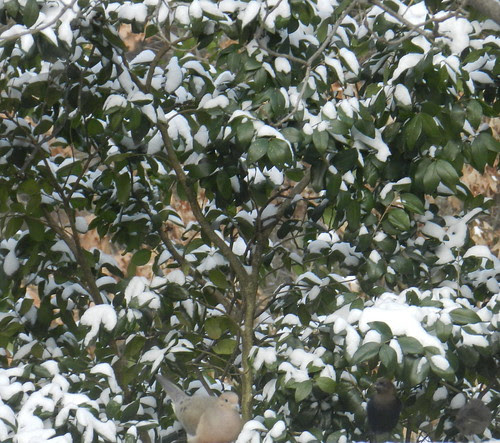 The male cardinal is watching me put food on the wall (after I cleared off the snow) below. 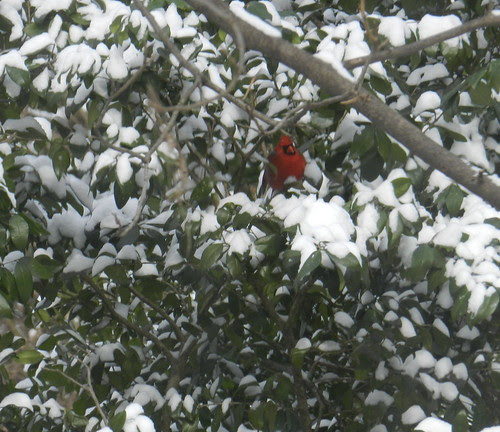 I went on a walk after taking care of the birds and enjoyed the snow although it was very cold. 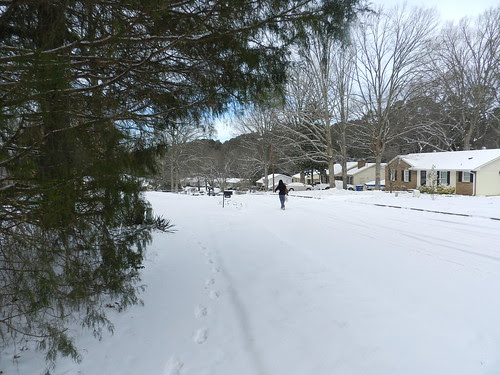 I was glad to see that many people in the neighborhood filled their feeders and I shot the carolina chickadee below at a house around the corner from me. 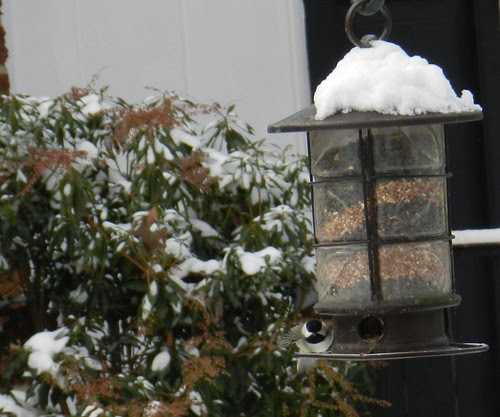 I made it to the closest park trail and checked out the creek. 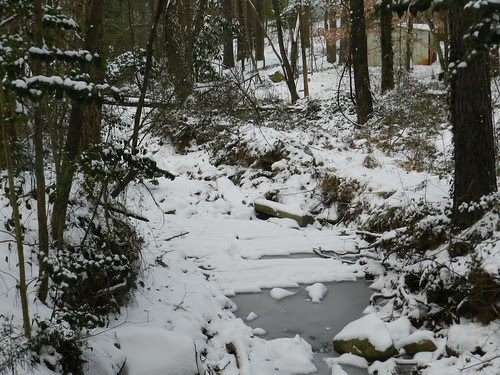 I know some of you have been getting too much snow and bitter cold weather but after barely having winter last year, I'm enjoying this one. 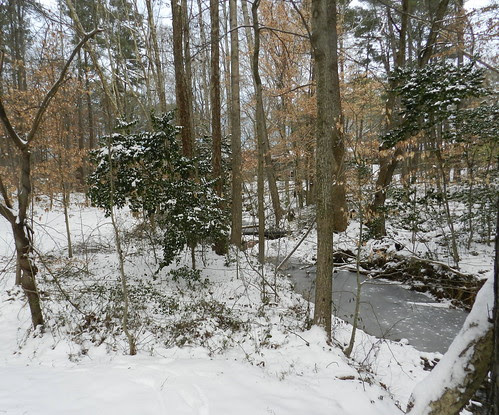 However, our cold weather has been in the low teens F as opposed to the much colder weather many people have had this winter. Also, we have been getting breaks with it alternating between spring and winter weather every so often. 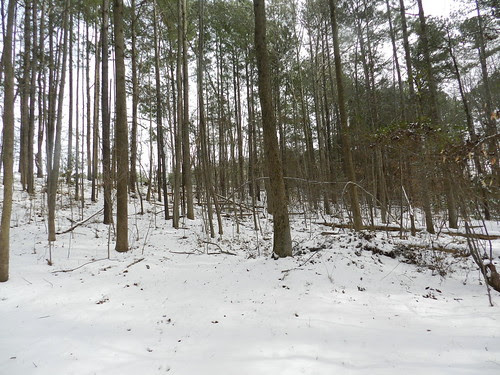 It's wild the way we can have 50 or even more degrees difference between warmer and colder periods. I've been taking a ton of pictures of the juncos. 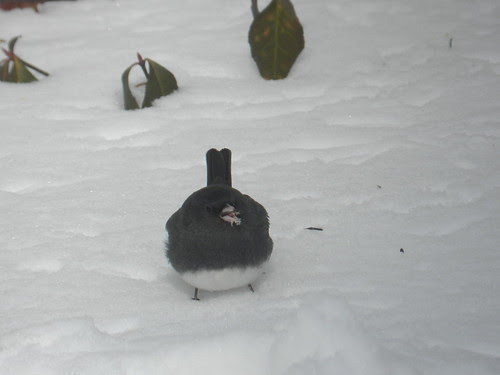 The male rufous-sided towhee below seemed to be watching me on Thursday. 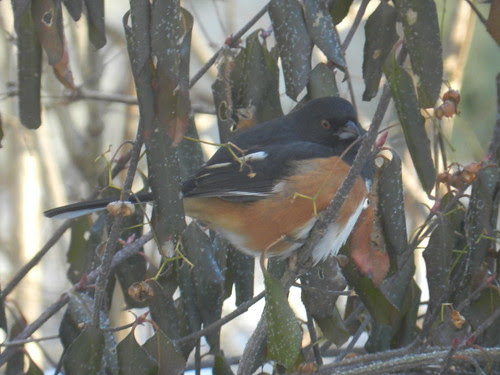 I've had a hard time keeping fresh water in the bird baths. 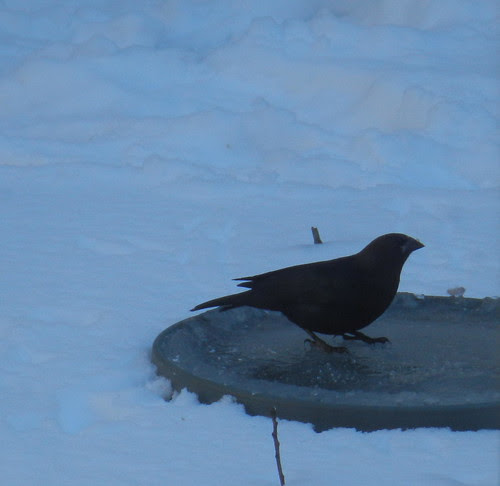 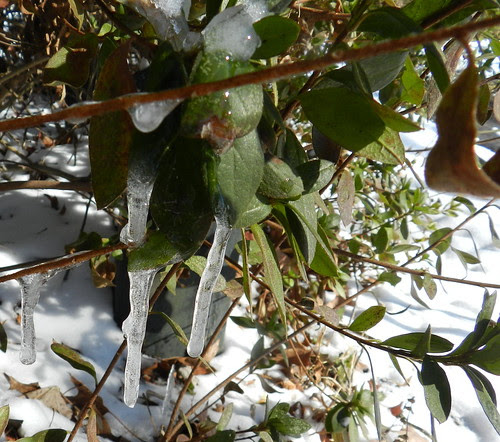 Thursday ended up being a beautiful day and it got warmer. 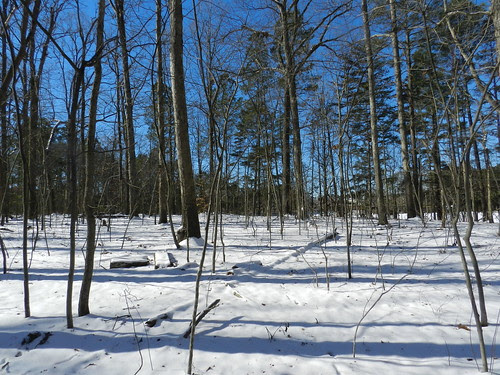 The finch enjoyed a bath on Friday which was even warmer. 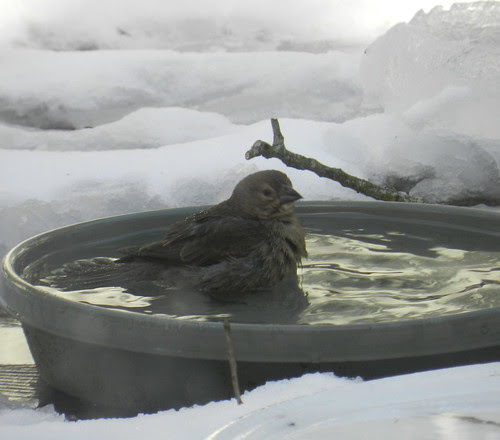 The female rufous-sided towhee showed me her profile. 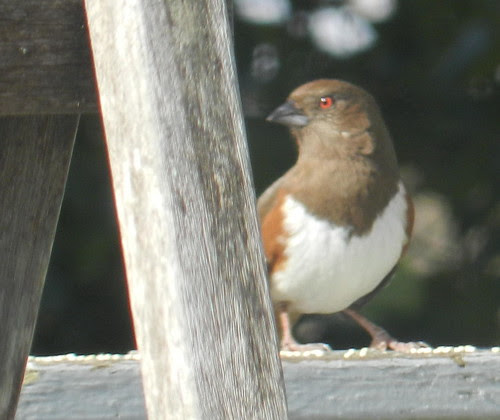 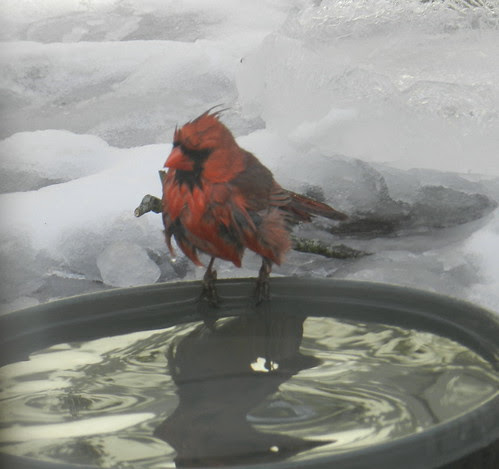 The female cardinal looked like she was debating a bath. 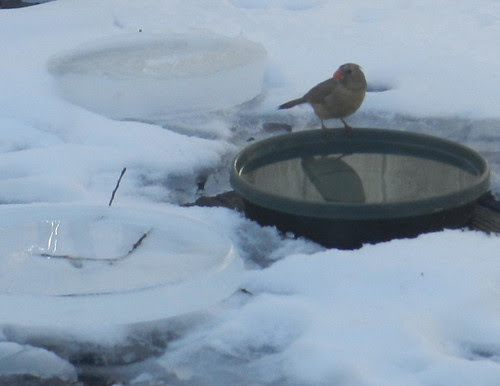 We had a wonderful sunset Friday night. 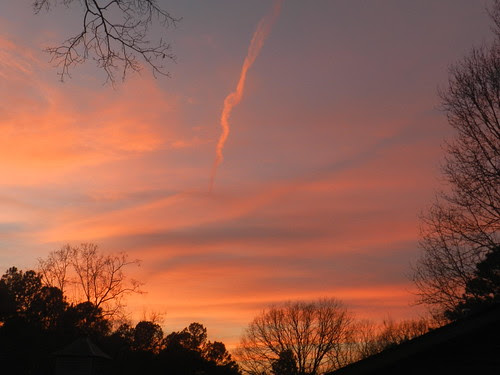 Most of the snow had melted by Saturday but when I went to Shelley lake I discovered the woodland part of the trails still had some snow left. 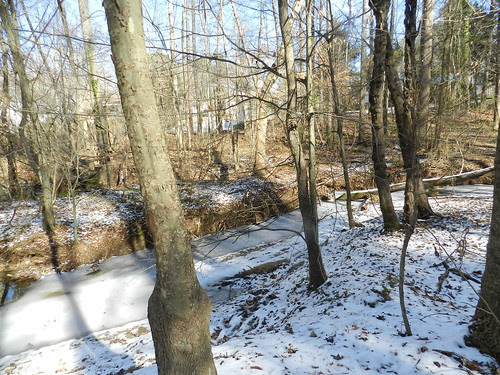 It was almost like two different places between the woods and the sunny parts around the lake. 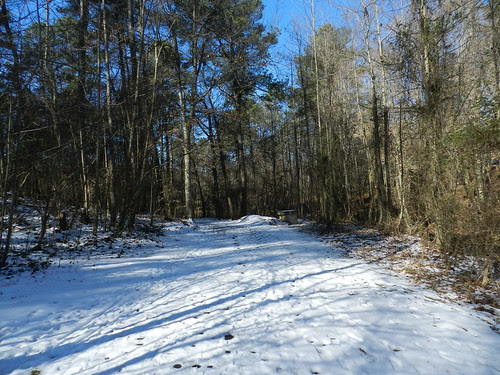 I was taking pictures when someone pointed out the bald eagle and I managed a few shots but none were that good (eagle near the top on the left and two herons on the right side near the top). 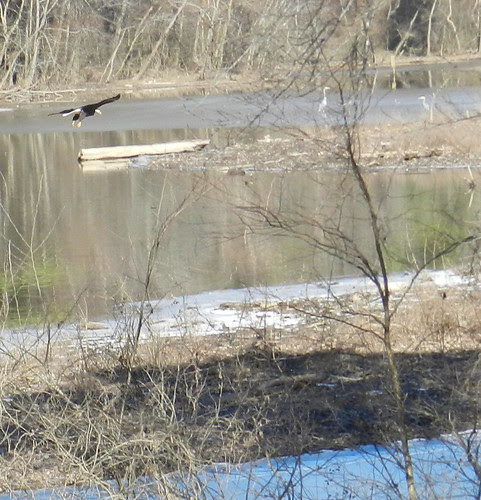 Most of the lake was still frozen on Saturday but it was beginning to thaw in the sun. 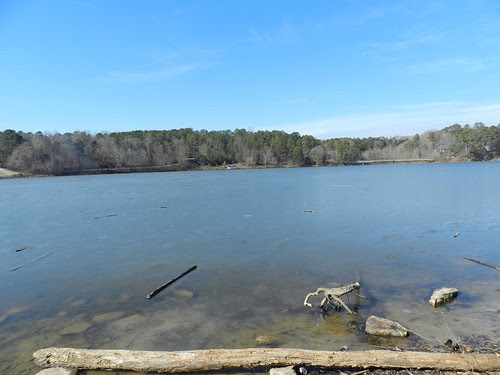 I caught the great blue heron taking off below. 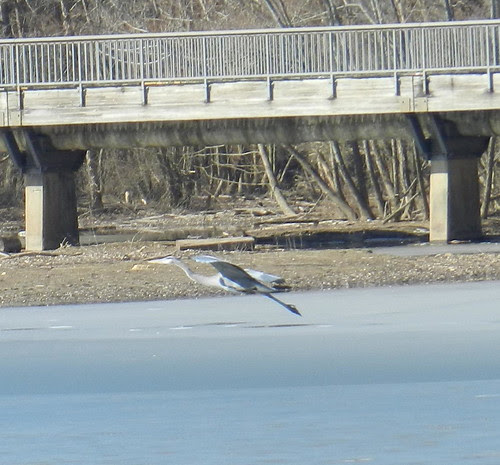 The heron was strutting in the next shot. I saw four different great blue herons at the lake on Saturday. 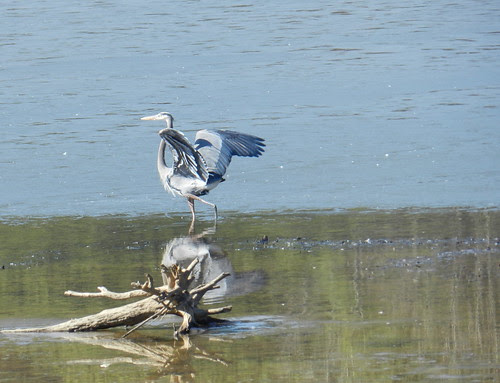 I took so many shots last week all my posts are getting long. 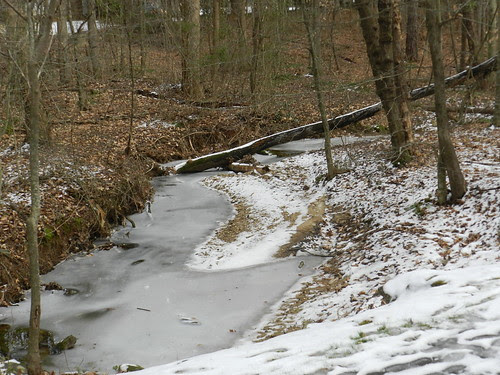 I like the way the moss and ferns look peeking out of the snow. 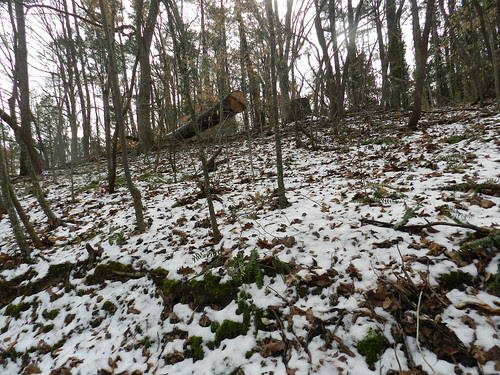 My what a difference a day makes. Sunday the lake was completely thawed out and the only ice left were a few bits and pieces in the creeks. 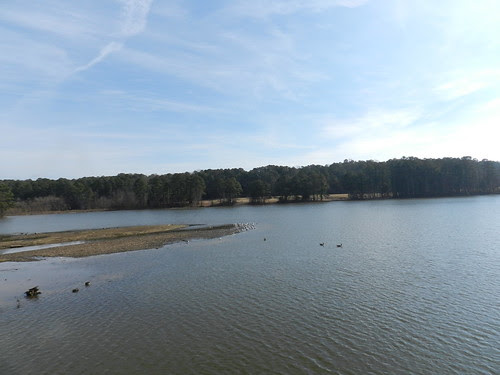 Sunday was groundhog day which I guess means there will be six more weeks of winter if I go by the last shot filled with shadows. 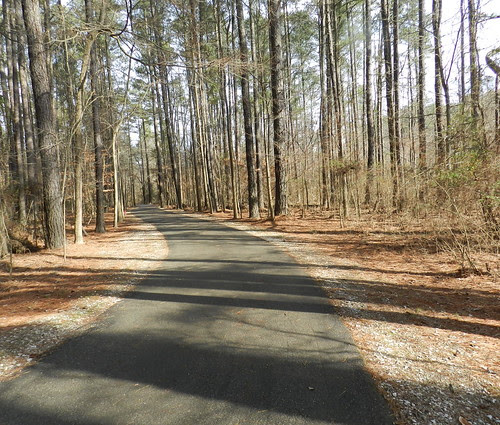 Click for the home of Nature Notes.
Posted by Carver at 4:00 AM

These are really beautiful. You are amazing with your camera.

Beautiful photos here, lovely wintry scenes with pretty birds and I thought the one of the eagle landing was awesome.

All beautiful - I especially like the cardinal in the bush. Hawk up-close sounds neat. Yes, lots of fluctuations in weather - I like winter, but many people do not.

I'm afeared the groundhog is right from what I've been reading about the storms that are expected. I loved the tour of your week...wonderful pictures, really give us the feeling of what it's like when the temperatures change back and forth like that.

All your birds are lovely but I am especially fond of the towhee today -- you caught that amazing red eye so beautifully. I remember the very first time I noticed those eyes.

I loved this photo-diary :-). The shots are very nice and lovely.

The weather has been fickle for sure. Great photos Carver, so many birds and that's a gorgeous sky!

Wonderful and beautiful to walk with you in the winter wonderland! I am back in the Netherlands. There has been no snow so far and many bulbs are showing their noses above the ground. Hopefully they won't be killed by a period of frost.
Wil, ABCW Team

I hope the bird bath was not freezing on the birds.

I'm so glad you feed the birds in your area, Carver. They have really needed our help this year!

I am glad you are enjoying the winter scenery and brought it to the nature lovers via Nature Notes Carver.... Michelle

The photos are absolutely glorious as usual...we have gone through 150 pounds of sunflower seeds the past 8 weeks...they are hungrier this winter it seems..what with the hay and corn for the cows and horses and the seed for the birds and scratch for the guineas, I may have to go back to work lol! Love your photos so much
hugs
Sandi