We are heading into winter weather wise. 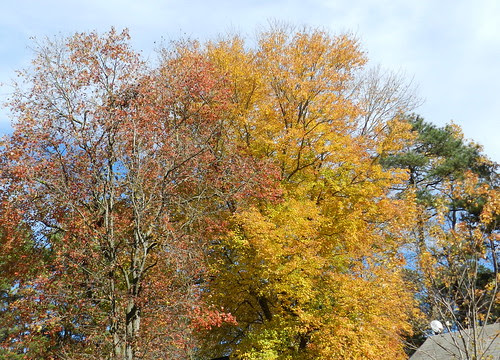 The bulk of the leaves left the trees over the weekend with a few exceptions. 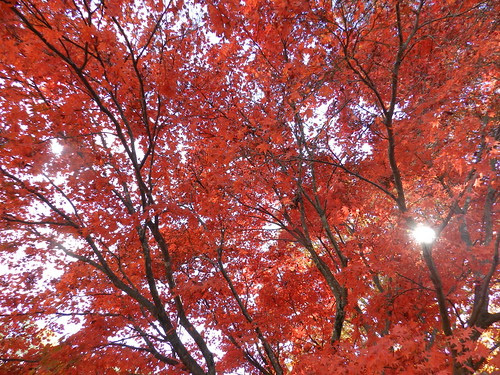 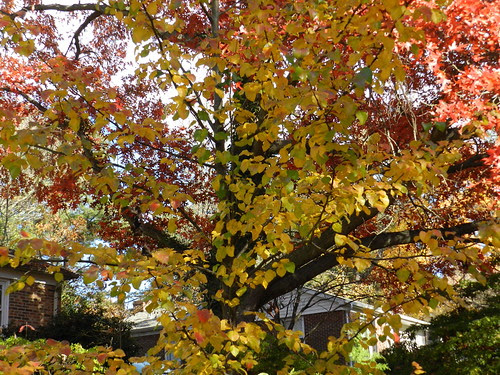 I usually cover about 7 days in my nature notes. 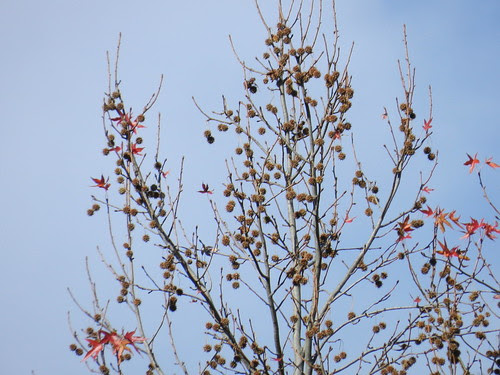 This time of the year there is a big difference from the way my world is looking over the span of a week. 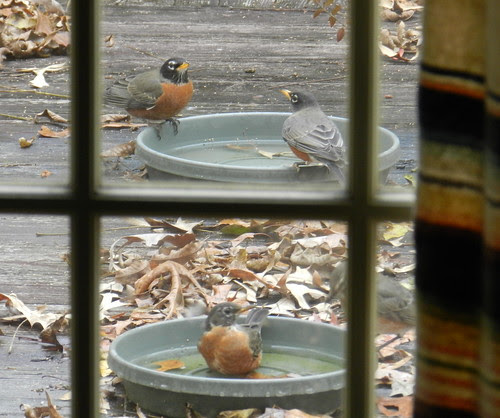 The American Robins above look like they are having a party. 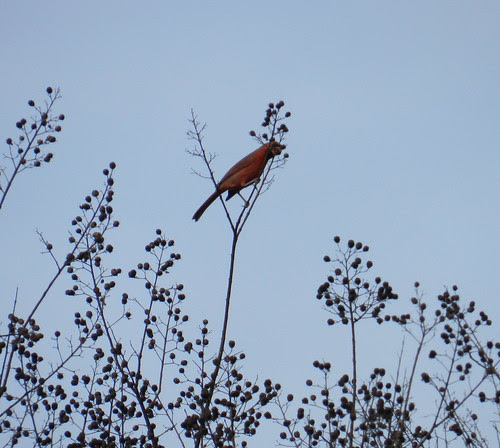 The male cardinal above is eating something tasty on the crepe myrtle tree and the female cardinal is taking a break below. 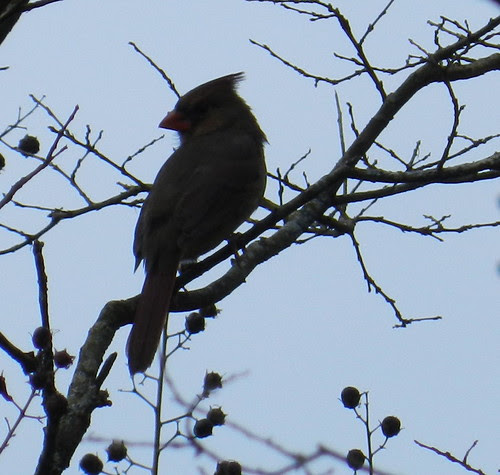 I've been seeing bluebirds, doves, chickadees, towhees, nuthatches and many other birds but most of my shots seem to be of cardinals. The sparrow and cardinal below are having a drink together. 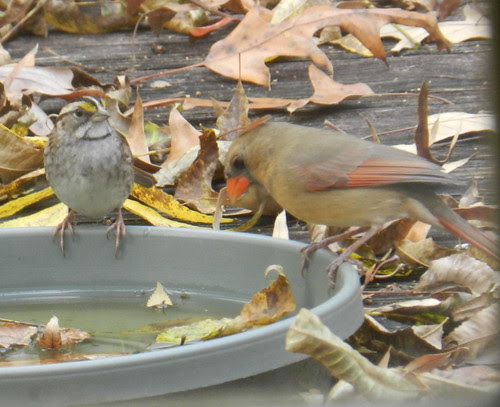 I like the way a few leaves clinging to a tree look. 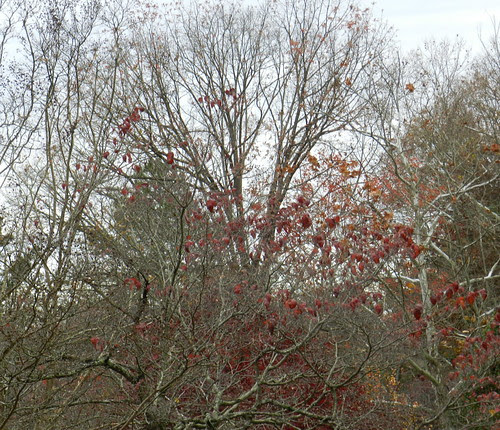 I don't particularly like the fact that trees are growing in my gutters. 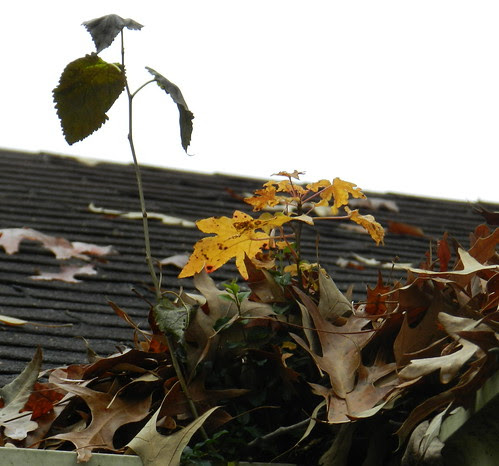 The bluejay has a wind blown look. 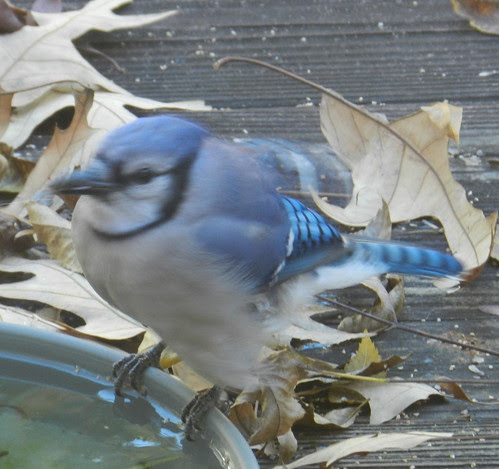 I think the bird below is a starling. 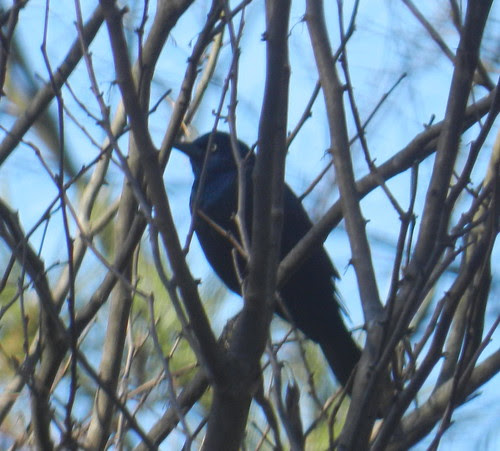 The past couple of days I had to remove ice from the bird baths once in the morning and once again in the early afternoon. 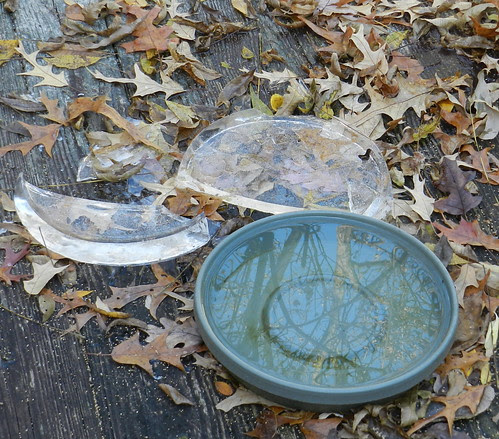 The female cardinal hopped in as soon as I gave her some warm water. 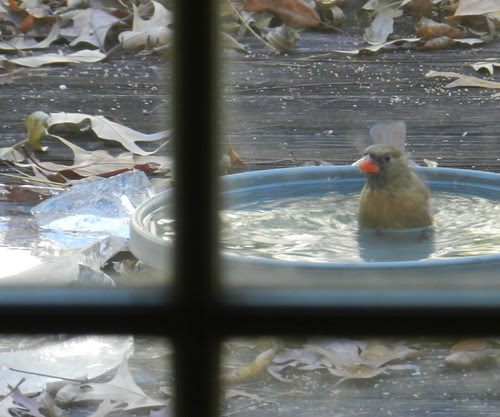 Another cardinal was debating whether to drink or bathe. 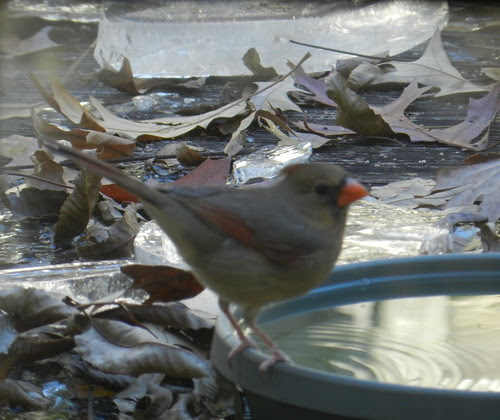 Click for the home of Nature Notes.
Posted by Carver at 7:53 PM

We've been having blue jay visitors. Love seeing the colorful leaves, the ones before the leaves fall off. Sometimes I get really busy at a foliage or bloom season, then when I have a bit more time, it's bare. So it goes.

Have a happy Thanksgiving.

Good of you to make sure the birds have water. Love your bird photos. Dianne

We have a bird bath in the yard that you have inspired me to keep filled this winter. Although, it gets so very cold here that I'm not sure it will be possible.

So beautiful birds enjoying their bath!Adorable set of images, the Autumn leaves are wonderful!
Léia

How beautiful Leora. Wishing you chaggim sameach. I do hope you[ll add your voice to the gratitude quilt this year:-)

oh Carver, I saw Leora's picture in the top comment and was confused about where I was for a moment… Happy thanksgiving to you as well and yes of course you are invited to the gratitude quilt as well!

Lovely photos. I like the birds sharing a drink.

Things changed quickly here, too. I don't have nearly the birds you do, as I took down the feeder last summer and just put it back up. I'm crossing my fingers they all find it again.

Beautiful pictures of autumn and so lovely birds.
Greetings !

So sweet that the bird waits for his personal bath valet to crack the ice... they don't know how lucky they are. Thank you for sharing the wonderful pictures ... and for the work you do to make them possible.

Looks like you are getting as much ice there as we are!

Happy Thanksgiving Carver! .... Love the birds... I think the one with the yellow eyes is a grackle... Michelle