What a great laugh 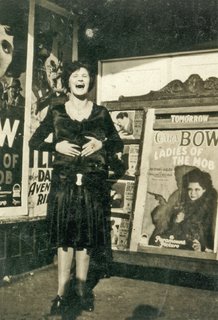 This old photograph of my grandmother made me remember what a great laugh she had. She laughed freely and often which is such a great quality to have. My mother died 16 years ago but she was made a part of the Friday service in such sweet ways. My mother's youngest brother talked about the trip out west that my grandmother took as a new mother with her husband, Carver Young, when they intended to move to California. Her husband died in Duncan, Arizona and she was close to death herself at one point. She took a train from Arizona with her baby, my mother, to West Jefferson, NC. She was despondent and wanted to give up but my mother, a three month old baby sitting on her lap, gave her the will to live. My uncle said my mother was an angel riding on her mother's lap on that train trip in 1924. It was very touching. Years later, after returning home as a young widow with an infant child, my grandmother remarried and had my mother's younger brothers and sisters. It meant a lot to me that they not only included my mother in the service but also her father who died in 1924. All of my grandmother's grandchildren and great grandchildren gathered this weekend in Boone, NC for what was truly a beautiful celebration of a remarkable life. My mother was a part of that celebration although she was the only one of my grandmother's children who didn't survive her. I know my mother is greatful for what good care her brothers and sisters took of their mother. I think the laughter this weekend, as my grandmother's family gathered to send her off in style, was as much of a testament to her as the tears. I remember when the saying started going around that the family that prays together stays together got started, I always thought that should be that the family that laughs together stays together. Love, laughter, hope, guts, are all qualities I admire and at 49 I am able to recognize that my grandmother was filled throughout her life with those qualities.
Posted by Carver at 9:25 AM

That was absolutely beautiful! And what a great photograph! Thanks for sharing.

"Love, laughter, hope, guts..." That's it right there. I'm going to remember that sentence and bring it out to look at whenever I need it. Thanks for the inspiration.

Happy belated birthday, by the way, I read about it on the OTBB at MPIP, but am unable to post there for some reason (persona non grata, hah! kind of suits me though...;)).