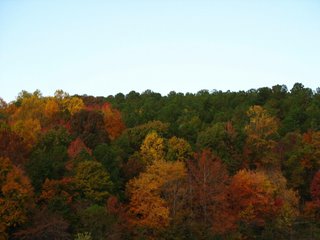 Thought I'd post one more fall photo. Not sure what settings I used with my camera but this one ended up looking almost like a painting to me. I took it a week ago along with others I posted from a walk at Shelly and amazing how much everything has changed since then. Hard cold rains have contributed to more and more leaves on the ground and less and less on the trees. Heading back up the mountain bright and early tomorrow morning to go to a large family gathering to celebrate the life of my mother's mother who died this week. There will be a funeral but in this case there is more to celebrate than anything. My grandmother lived close to 103 years. My mother's father died in his early twenties and I was named after him. My mother died at 65, over 16 years ago. I have aunts and uncles from my grandmother's second marriage and a bunch of cousins who have a bunch of children. Both of my sisters as well as my brother are flying in and my daughter flew home yesterday from college so she could go. She felt like we all do that this might be the last gathering with all the aunts, uncles, cousins, etc. I think it will be a joyous occasion in many ways as my grandmother had a long life and even at 103 she left behind a horde of people that loved her.

I had my dermatology appointment this week which went well. Never much to look at on my skin but my dermatologist is easy for me to talk to and talk I did. He has referred me to a medical oncologist who I will see at the end of the month. This won't change anything about my regular oncology follow-up which is with a surgical oncologist at a large research university who has a lot of experience with melanoma and has been involved with melanoma research into novel treatments. I like and trust my oncologist but I have a slew of little questions that I don't think have been answered and I'm concerned that my next appointment isn't until March and it will be with the NP. I'm fine with seeing the NP every other appointment but the timing was bugging me. I saw my ONC in September but so much of the appointment was spent on the issues relating to MRI's my PCP had done and the main thing that got done was I was scheduled for a PET/CT scan and surgery to excise a lump from my back. I had the scan and the lump was excised. My surgery check a week later was with the NP who gave me the pathology report on the lump which was benign and said the PET/CT scan was normal. She said I'd see her for my next 6 month appointment since the one I had a few weeks prior was with the doctor. They usually give me my PET/CT scan reports but this time didn't so after some agonizing, I ended up getting it from medical records. Lots of little issue that weren't big enough to be of concern yet. However, given my history and a blood test my rheumatologist did which showed I had a high CRP, I've found it hard to leave it there. If I had seen my ONC and been able to ask questions point by point about the scan and the other issues, I might well have been reasurred but without that opportunity I've continued to have to push away thoughts. Seeing a medical oncologist for a consultation is perfect. I'm not changing clinics, which I don't want to do, I want to continue with my surgical oncologist because overall I trust him but I am afraid of letting things go and later regretting that I didn't pursue these pesky things. The pesky things include my groin where the LND was, a 1 cm hypdensity on my liver with no appreciable FDG, a tiny nodule on my lungs with mild appreciation, and sub cm nodes in my thorax which are to small to adequately characterize.

There I've said it, those issues worry me mostly because, except for the groin issue, they are new and so far as I know I won't get another scan for a year as part of my regular melanoma follow up with my surgical ONC. I don't think they are anything that are likely to relate to melanoma but combined with the CRP blood test being 10.5, I want to ask questions about these issues and seeing a medical oncologist will hopefully help put it together. The CRP is a non specific test which can relate to inflammation. It can mean I have a harmless infection. It can be a signal for a host of things my rheumatologist doesn't think I have. It can signal cardio vascular disease. It can also indicate cancer and in terms of melanoma some doctors have written that it is sometimes an indication of metastatic disease with melanoma. Yes, I just had to google with CRP and melanoma in the string. It's also kind of like these precscription medications that say using this medication may cause everything under the sun but probably won't cause anything. Paraphrasing here. I'm not really all that worried but I'm not happy that my ONC doesn't do any bloodwork or get reports from my other doctors. I see my DERM more than my ONC but I don't have anything to follow on my skin.

My concerns stem from having at least a 6.9 mm breslow with 2.8 mm more removed during the WLE. My concerns stem from having a strange history where I survived nodular melanoma for decades before it was removed. I know my body does something right and fights back in ways that most people don't. I know that I am beyond lucky and I suspect everything will be okay but I've read too much to feel comfortable leaving all these questions I have unanswered. I don't want to kick myself if things start changing fast and I have wondered about things but not tried to find the answers. Hopefully I'll see the medical oncologist and he'll answer my questions and I'll be reassured. That's what I'm assuming will happen.
Posted by Carver at 7:27 AM

Ah Carver, I am sorry to her about your grandmother. IT was a long lovely fulled up l ife one which we should and could all aspire to!

Your Blog is always a lovely, and I have tried to get it bookmarked, think I did but where? hahah nevermind, I can always find it.

Carver, I'm so sorry for your familiy's loss, but what a life to have lived! 103, that's just amazing.

I just wanted to let you know that I'll be thinking of you as you face your next round of questions and doctors.

You offer so much love, reassurance and support to us all and I want you to know that it's coming right back at you from me as fast as I can send it!

you sure have a lot of thoughts running around in your lovely brain...I would be boggled down by now. I'm glad you'll be able to get some of your questions ans by a medical onc...sounds like a good way to go. Put your mind at ease.

Sorry, about your grandmother..I'll bet she did have a very full and productive life. You just may follow in her footsteps. One never knows. As always your blog is so full of information and positive thoughts kudos to you. You offer so much to all of us..it's encouraging and inspiriing. Take care and I'll be watching for your next question answer session with your doctors.
sue