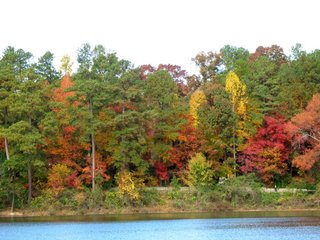 I walked five miles yesterday with Bill and made myself go to a water class today. I am so tired I feel like hibernating for a month. Well, duh. In August when things got much worse I wasn't even trying to walk around the block. Then I built up to a mile and occasionaly two to three miles tops. I did one photo walk which was between four and five miles a month ago but I didn't do much walking at all the next week. I went to P.T. but that was pretty much it. All my long walks have been with my camera. Yesterday, I didn't take my camera and we walked at a good pace until near the end when I had to sit down and rest for a minute. I made myself go to the waterclass today because I don't want to lose my momentum with that. I think the water is helping with my lymphedema but it's exhausting. Mostly from doing movements I'm n 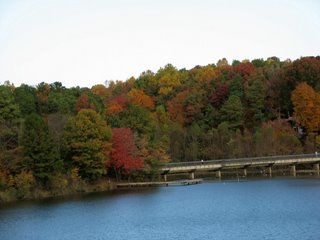 ot used to. I feel like if I stop, I'll never start again. I do have a sense of being at a make or break point. If I get any heavier, I'll never get back to my fighting weight. I could care less about the cosmetic issue. I think people look good at all different sizes and that side of things isn't important to me but I want to be at the right size for me. I have pretty much given up on my goal prior to the groin LND of doing a beginner rock climbing course. Considering how hard it was to do an indoor climbing wall with my daughter, in January 2005, a month before my melanoma dx; when I was in the best shape I'd been in decades, it's a little over the top to think I can rehabilitate to the point that an easy rock climbing course would be possible. However, maybe I could climb into my oak tree by say 2008. That's something I've never done although I've thought about it at various times since I moved into my house in 1984. My balance is tremendously improved since I've 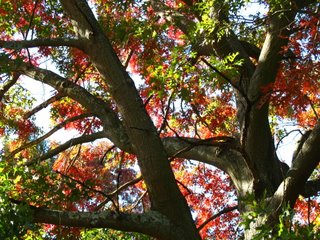 been on the vitamin D supplements so that deficiency was the reason my balance got so screwed up over the past year or so. That is great news. I worried about the balance problems I was having almost more than anything. Pain sucks but poor balance without knowing what was causing it was frightening for a variety of reasons. I am so greatful that a benign answer was found to that question. I bet my neighbors would think I'd lost my mind if they saw me sitting up in my oak tree one day. Maybe something that simple will be my new goal. I'm still recovering from the frozen shoulder but that got a lot better with P.T. and I have close to full range of motion back. I need to find my rhythm. I need to find a way to keep going without losing momentum. Running would be great but that almost seems more unrealistic than tree climbing. When I look back it seems like so many of my problems, particularly neurological ones started when I was trying to jog after recovering from the LND. Every time things have improved a little, I've tri 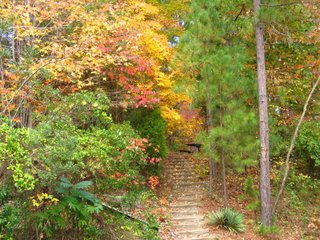 ed to jog again and very quickly things start going down hill again. So perhaps I'll start thinking about a safe way for me to climb up into my large trees. That would take a lot more upper body strength than I have which is why I never tried it before when I was fairly fit. But the good thing about climbing a tree is that you get to rest on the branches. I used to love to climb trees all the way through to the time I was in college. When I was in high school I'd climb up into the trees and read a book. Sounds very appealing even now. Then again, climbing up and down some pretty stairs is pretty strenuous at the moment and would be more than enough for the endorphin release I enjoy from cardiac exercise.
Posted by Carver at 5:31 PM

FIVE MILES?!!! Wow! I mean, really, wow! Yes, keep that momentum going (it's hard, isn't it?). It feels so good in the doing, it's the getting out to do it...that initial getting UP out of the chair. I swear, that's what it is for me.

Also, I LOVE that blue sky photo with the fall foliage. That jewel blue sky--what could be better?

Thanks again for the walk outside!

I can't tell you happy I was to read your blog today and get all caught up. It's so reassuring that it's all still here and the same and it felt so great to lose myself in it. It's really a blessing and gave me a much needed boost this morning.

I can't believe how well you're doing with your exercise, it's so phenomenal, I know that it must be harder than you're letting on, but your spirit is pulling you through this and it's amazing to see you seeming to feel so well.

I was interested to read about your vitamin D issues wrt balance. It's funny, but my balance has been crappy for weeks and now they're looking into checking my levels, for one because of the drugs affecting them, but also because they want me to be able to function normally.

I had forgotten about your previous issues, so thanks for reminding me.

Anyway, I just wanted to say hi and thanks for your writings and (beautiful) pics, your blog has always been one of my favorite times of day.