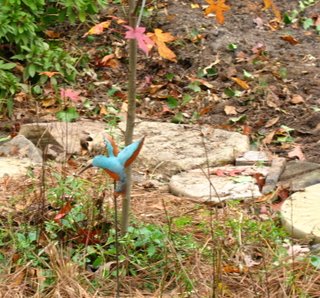 I had a blast setting up my new/old driveway garden. Little did my unsuspecting neighbor know what he would start by stepping on my grave before I was in it. That's what it felt like to me even though I knew he didn't have a clue. Part of why I'm so defensive about all my little stone, and other hard material, surrounded mini gardens is because they are all me. A good friend built my year round boxes, greenhouse, storage building with garden boxes in front and I love having those areas for gardening. However, the ones that I lovingly created by myself are the little stone circles which have had a variety of plants through the years. At one point I had pansies and other annuals until I moved towards self seeding wildflowers. Yesterday I moved some of my garden ornaments into my driveway garden. T 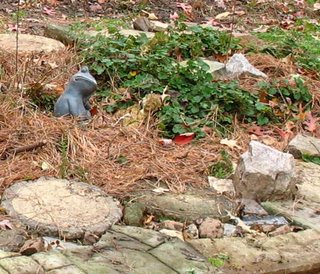 he garden guards include a metal hummingbird, a couple of frogs and a cherub. Even if the stepping stones, granite, marble, sea stones, river rocks, etc. are covered by the emerald carpet which grows like crazy in the spring, I know my froggies and hummingbird will bite back if a lawn mower gets in there way. Today my work break will be a return to the water classes I'm doing at the YMCA. I am starting to feel all the gardening I've been doing and want to be smart about it. I also don't want to lose the momentum I started in terms of going to water classes which are a good total body workout. I had my bloodwork done yesterday at the rheumatologist's office. Hard to believe that it's already been two months since I had that done. During that two months I had the benign lump removed from my back, started the vitamin D suppliments the rheumatologist prescribed which have helped 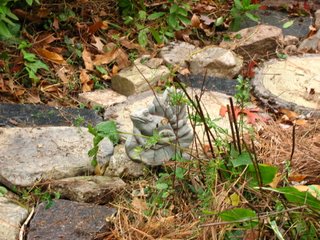 enormously with balance and bone pain, and completed the hospital physical therapy which has helped build my confidence so that I could not only go nuts when my garden was threatened but I could also do something about it. I sound so melodramatic. Ewwwww, threatened garden, garden guards, too silly! The blood test I'm most interested in is the CRP. I know the vitamin D levels are coming up due to the balance improvement in particular. Hopefully the CRP level will be zero. The CRP is the one which is sometimes high with people who have metastatic melanoma. I'm not overly worried because it's also high for people who have bronchitis or a host of other things. However, I'm glad I'll be seeing a medical oncologist for a fresh look at the whole picture. As I've said before, I don't want to change doctors, I have confidence in my surgical oncologist at UNC but I think at this point it will be reasurring to get a fresh look from a medical oncologist and that's just around the corner on November 30.
Posted by Carver at 8:52 AM

Carver~
Just wanted to pop in and wish you a happy (albeit deplorably belated) birthday!! Sending up many good wishes for those upcoming doc visits, along with many thanks....

you crack me up..garden guards...hahahha now, tell me, do you actually have a driveway or is it all garden...I'm sorry I'm laughing but you know laughter is good for the soul..I picture all the little kiddies in the neighborhood lurcking around wondering if they dare come to the door with all the froggies, etc protecting the driveway. I have this silly mental picture of your whole yard being in wild grass, roots, floweres of all kinds with veggies planted inbetween..I love it and it's probably the way most of us with our outreageous manicured yards would like our places to be also. hahahhaha I love your written word and much good luck with your doctor appointments. You do have a great sense of humor which we ceratinly all need from time to time. smile, sue

I love the garden guards!

My way would be more razor wire and anti-vandal paint (accompanied by threatening looks). I know... overkill perhaps?

My style of gardening has always been more wildflower than manicure and I can so relate to the way you've designed your garden. I'd love to spend an afternoon sitting in it with a good book.