Hard to see the birds for the trees 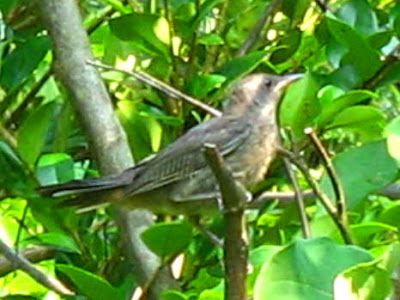 I was outside yesterday and there were so many birds I practically ran into them as they flew to safety. There were quite a few well within camera range but they were somewhat protected by branches and leaves so I was only able to get a few photographs of them and none which really did them justice. The first picture is cropped out of a much larger picture and loses much of the resolution which is my biggest problem in animal photography. The second picture doesn't have any birds I could find but when I snapped it I was focusing in on a bird. I guess it hopped out of range the minute I shot the photograph. 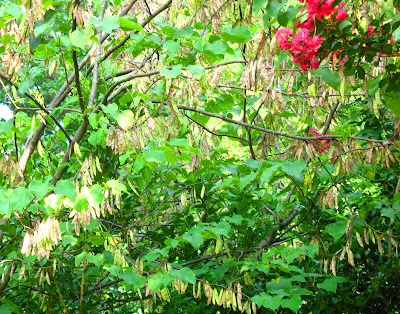 I've never understood the expression: hard to see the forest for the trees because I've always had trouble in a forest seeing the individuals trees. I tend to see the forest as a whole or at least a part of it. Obviously not seeing the birds for the trees is different since the birds move but even with stationary trees, I find it hard to focus in on individuals or groups of trees when I'm wandering through a forest. 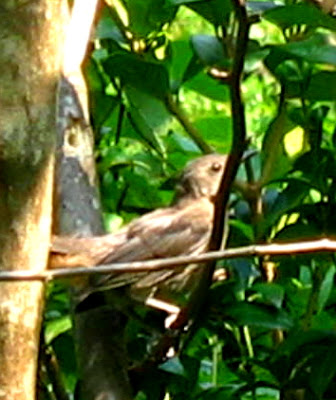 I am not at all sure if the analogy I'm heading towards will work, it may be the opposite of my point. My biggest fear starting in early July of 2005 was that a melanoma recurrence would be lost in a sea of symptoms until it was so advanced that my treatment options would be limited. When I say recurrence, I mean metastatic disease to a node, organ, bone, etc. My skin is quite easy to follow and with a deep primary and positive node, my biggest concern is about my organs. Treating the symptoms has created its own set of issues because neurontin which keeps me from feeling like I have sunburn and also keeps me from tingling in unpleasant ways has an annoying side effect, brain fog. On the up side, a simple vitamin D supplement has corrected most of my balance issues and those issues caused much of my fear that my brain might have metastatic disease. 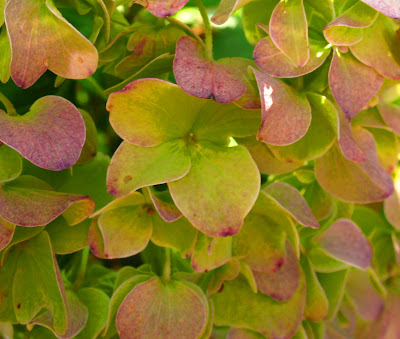 I don't want to whine because as much as chronic pain and other symptoms suck, I am incredibly fortunate. For the most part between the six specialist I see, my symptoms are managed well enough, and I have some assurance that a recurrence would be caught reasonably fast. I know people whose prognosis at diagnosis was much better than mine who for no obvious reason had a fast disease progression and sadly are no longer with us. People who tried everything, endured difficult treatments, and all to no avail. It's incredibly sad to see that happen and with only a few exceptions these aren't people I have met in person. However, they generously shared their journey and information and no doubt helped many people they never met. 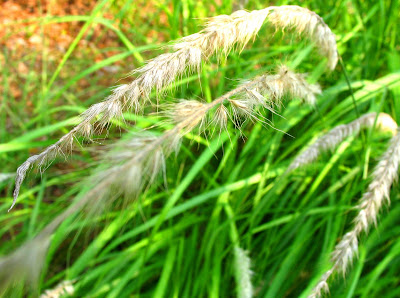 One of the reasons I'm thinking about my own situation and the sea of specialists I see is next month is a doctor heavy month and I glanced at my September calendar yesterday. I will see my rheumatologist, dermatologist, gynecologist and surgical oncologist. That's a lot of ologists. I am aware that I'm lucky to have good health insurance because without it my care would be quite different. I find myself thinking once again about how I can get the information to the appropriate specialist that might help them help me. Some of it's not on me. Some of it's on funky blood work that's being followed. I won't have any scans for a while so that's off the table. I will have 4 different sets of eyes assessing the situation. For that matter at the surgical oncology appointments there is often many more eyes since a resident doctor often comes in first, and sometimes the NP does too. Then the surgical oncologist often has several medical students with him but they are generally in the periphery. 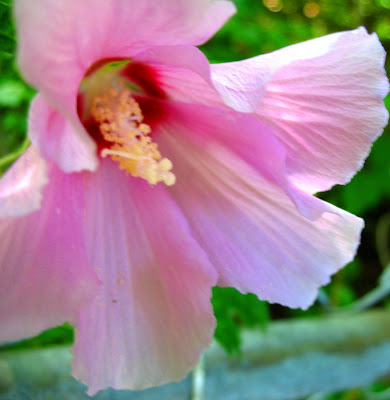 I guess if there is any point in this long ramble it would be that I'm afraid that the problem may be lost in the sea of specialists. If I'm the bird and they are the trees I guess my analogy would work. I know that every time an intensive month with various docs approaches, I once again start thinking there may be some solution in there but I often feel like each of the specialist thinks another specialist is probably dealing with some particular issue when I'm not sure they are. I guess this would be where the primary doc who gets all the reports might come in but since I never see her, that is unlikely. Even if I did see her, it still seems to go back to the specialists. I suppose I'll get ready to go for my periodontist appointment and ponder on this later.
Posted by Carver at 8:12 AM

I used to avoid going to doctors...I still don't like it but it is the way that it is. (I just never realized that there are so many different kinds!) You are wise to have several from which to glean information and the watchful eyes are a plus.
We are the lucky ones, my friend, to have a chance to see it all from this side of the perspective, a choice of another context...
Yep. Appreciation.
I'll stick with that one. Appreciation.
Love, K.

Me too on the avoidance issue. Boy have I made up for all those years of avoiding any and all doctors. However, if I hit the 5 year mark without a recurrence, I'm hoping to cut WAY back on many of the ologists. Two and a half more years to go, yeppedoodle and then I'll head off into the wild blue yonder, a back pack on my back, scaring the birds with my aging female tenor. Love, Carver