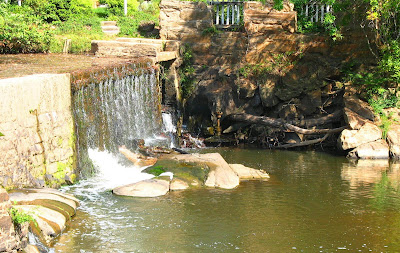 Last week, I took some pictures at the old Lassiter Mill Site which is on my city's greenway route. The parks and greenways for the most part are along lakes, and streams that cut through the city and subdivisions. It's nice because you can walk on wooded paths and in some cases the trees shield the houses from view. I hadn't intended to write about Lassiter Mill, other than a brief mention in my blog, but when I started googling for a brief blurb to accompany the pictures, I found almost no information. One of the few extended discussions about the falls involved guess work which was partially incorrect.

There were much better pictures than I took on one site but no discussion of the history of Lassiter Mill. There was a brief, accurate mention of the history but it took one line from distant history and put it together with recent history which I suspect is why another site had some inconsistencies. The most information was contained on a site with NC waterfalls and that site even asked if anyone knew any more about the Lassiter Mill falls. The problem is none of the tid bits added up to the facts. I didn't see a place to add the information I had on that site. Therefore, in the interest of putting the whole story on the Lassiter Mill (Raleigh, NC, USA) out into the vast internet repository of information, I blew up my photo of the plaque above so I could type up the information. Now when someone is searching to find out more about this site, they will possibly arrive here. I wish the City of Raleigh's site had a write up because mine may have typos but at least I'm putting it out there for the curious. Also, since I am including the plaque photo, that can be clicked on too. 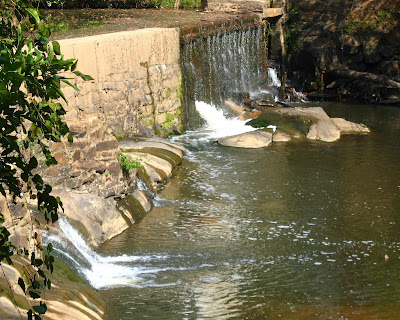 Without further fuss, I give you the Lassiter Mill Site write-up as transcribed by me hurriedly from the plaque: Fifty yards north on the banks of Crabtree Creek, stands the stone foundation of Lassiter Mill. The site originally known as the Great Falls of Crabtree is one of the oldest mill sites in . The first mill to be constructed here was by John Giles Thomas before 1764. Isaac Hunter was among numerous owners of the site, where successive mills were destroyed by fire, one in 1804 and another in the late 19th century. 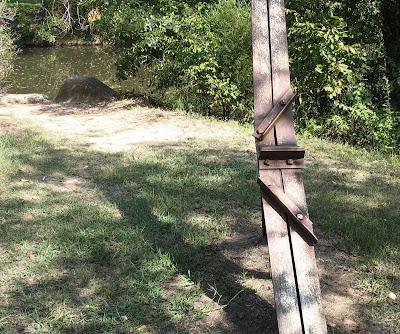 In 1908 Cornelius Jesse Lassiter purchased the land and built a grist mill. Using two forty horse turbine wheels to generate power, Lassiter ground wheat and corn, and later ran a lumber mill and a cotton gin. The site also became a popular retreat, as a picnic and swimming area for the residents of . The Lassiter Mill remained in operation for 50 years until it burned in 1958. The Mill stone you are standing on was one of several used in operations of the mill. Located to the left of this monument stood the Lassiter Mill bridge. The bridge a 110 foot long, 15 foot wide, by 20 foot tall steel truss bridge, replaced an earlier wooden bridge. Originally spanning the north of Raleigh the bridge was relocated to the Mill site in 1920. Condemned and demolished in 1984, it is thought to have been the last remaining steel truss bridge in . 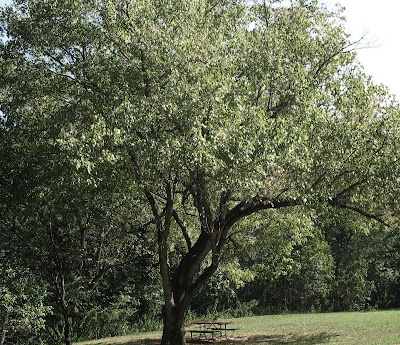 A piece of the bridge is located to your right. Today the Lassiter Mill site is a part of the Capital Greenway system. Note - the piece of the bridge that the plaque refers to is the fourth photograph from the top of this post. All of the photographs in this post were taken last week at the Lassiter Mill Site. This was another of my photo journeys following a medical related appointment. I was on my way home from standard follow up on blood work at my rheumatologist's and it wasn't really an appointment other than with the needle to take a little blood. 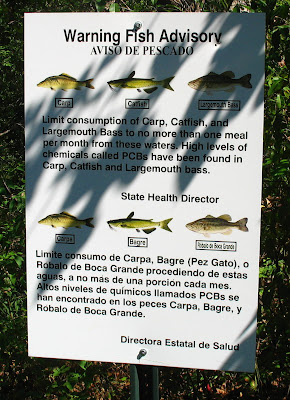 When I was looking through my photographs at the Lassiter Mill site it occurred to me that the one above would have been a good one for the Blog Action Day on the environment. It says that high levels of PCBs have been found in carp, bass, and catfish from the waters here and therefore limit consumption to once a month. I don't know about you but I'm limiting my consumption to zero from those waters. However, I realize that doesn't protect me from fish I eat which is likely caught in waters that are just as polluted. If the packages of fish in the grocery store start to contain a warning like that, I'll stop eating them. Not logical at one level to wait on the grocery store label.

North Carolina should be proud to have such a historian working for them. I think it is great that you took it upon yourself to perserve this history.

Very nice post. That lost photo...hmmm a bit scary! I used to eat tons of fish. NOw I am not sure what to eat anymore!!!
;(

Hi Theresa,
I had to laugh because I'm a rather all over the place historian, going on and on to get to the history. What bothered me is a short blurb I found online took the sentence about it being one of the oldest mill sites in Wake county and then said that the mill was built in 1908. Since that skipped the part about the first mill there being built before 1764 it leaves the wrong impression. Someone else mentioned they found it was reputed to be the first mill site but they questioned that since the first mill was constructed in 1908. And there you have the mythology springing up on the internet about a little known mill, ha. It did bug me.

Hi Sabine,
I know what you mean about it being hard to know what to eat. I find it very confusing and sometimes I feel like burying my hand in the sand.

I love the photos of the mill. I wish I could sit at that picnic table, sip a glass of wine, with perhaps some cheese and listen to the water falling. And think only of someone who was there in 1764 who didn't know about PCBs in fish or care how nutritious the wheat was that was ground there. Or that anyone would ever appreciate his simple life.
Appreciating doesn't mean that I would want to trade, though!
Someone once told me the time doesn't really move in a line, it is more of a spiral. Thanks for taking part in preserving a piece of the historical helix. And giving me more reason to eat organic stuff. : )
Love, K.

I like the image of life as a spiral. I hope one day we can sip wine somewhere and meditate on who sat there before or maybe just get silly on wine and brie, and listen to JT on a portable stereo.

I don't think moonshine is in the cards although there was a time long ago and far away, in my lifetime that I . . . I'll leave it there since one of my uncles used to work for the NC SBI and later for the US ATF and during his career he broke up moonshine operations. I had that in my head when I was at a party during my ill spent youth and someone offered me . . .

karoline in the morning said...

what a sad sign of the times, that the foods we lack most in our diets are too polluted to eat..

Lovely photos of an obviously lovely spot Carver.
Fish is a problem, too much you rung the risk of mercury poisoning but too little you don't get enough omega 3 and 6.

Hi Carver,
just wanted to let you know you have a little something at my place today.

Hi JMB, I know what you mean. Sometimes it does feel like you can't win for losing. I still eat fish, particularly salmon, but signs like that make me think more about where it comes from.

I enjoyed this trip thru your area.

Thanks so much for visiting. Carver

I really enjoyed your comments on the Lassiter Mill site. I used to go there as a child. The mill was gone ,but the bridge was still there. My grandmother used to drive her Cadillac across the single lane bridge. That was a treat for a little boy. I also remember that after a flood the bridge was closed to vehicle traffic. Teenagers and college students used to swim in the creek and jump off of the bridge. Then later the bridge was removed when the area was developed for housing and then the PARD took over the old mill site.