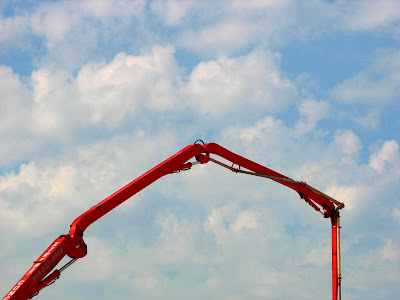 I had thought that I'd do a post with more pictures from the NC Museum of Art's park and walking trail. As I mentioned in my last post, I was rushed and only did the main walking loop so I didn't get a chance to take pictures of the art in the woodland setting. I will have to go back soon and do that. The picture above is taken of the construction site. The museum expansion is moving forward and in front of the museum it's a big dirt pile with work in progress. It's funny how sometimes construction equipment can look like contemporary art. Maybe it's just me but that's what I thought the shot above looked like. It's a piece of construction equipment working on the museum expansion but it could also be part of the art in the art park. All it would need would be a plaque in front of it with a title like - form and function in motion. That's not meant as a criticism of contemporary art. It's meant to express that I find the red arm above to be aesthetically pleasing. 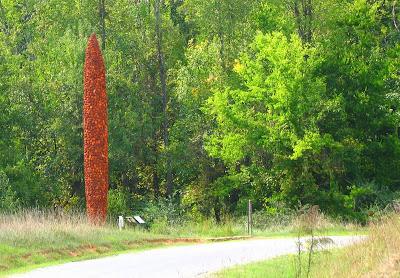 The piece above is a commissioned piece of art in the park, named Juncture and it's by Martha Jackson-Jarvis. It's described as a tall sentinel of glass, camelian, and shattered brick marking the juncture of two trails. The two trails which intersect there are the prairie and woodland trails. 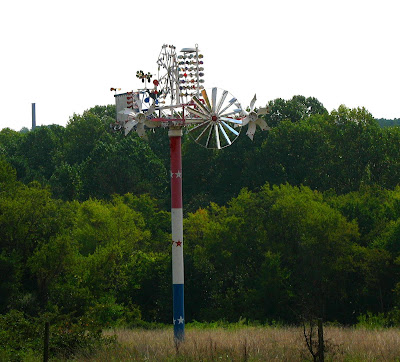 Another large piece on the art walk is the Wind Machine, pictured above, by Vollis Simpson. It's a 35 foot tall work constructed from found objects which are placed above a red, white and blue poll. I was disappointed that the horses which usually graze in the pasture behind the poll weren't around. I think the pastures and barns are all part of the NCSU agricultural school. When I looked it up, I found mention of how The NCSU Department of Forestry and Environmental Resources is working with the Museum to restore this field to be as much like a Piedmont prairie as possible. The museum park and land owned by the university border each other and there is some collaboration. If anyone is interested in the habitats in the park or in the collaboration between the museum and the university there is information about that on the Park Habitat site. 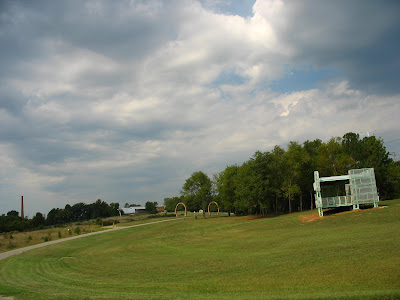 The picture above shows a big loop of the trail and the ellipses which I already posted in my post on Tuesday can be made out near the center. You have to click inside the photograph for an enlargement to make that out very well. I'm also posting another shot of the ellipses below. The model on the right side of the picture is called Lowe's Pavilion and is by Mike Cindric and Vincent Petrarca. It's described as being an art shelter project whose shimmering panels mimic the iridescence of dragonfly wings. I didn't see the dragonfly wings in the art but I did get buzzed by a dragonfly in flight. 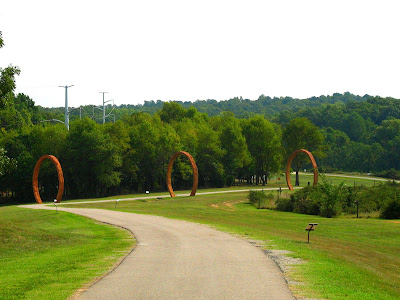 I like the ellipses because the light plays with them and you often end up with full shadows to form additional ellipses on the ground. Unfortunately, none of my shots of that worked out very well so I'm not posting them. Another feature of the museum park is an amphitheatre where they show movies and have concerts in the summer. 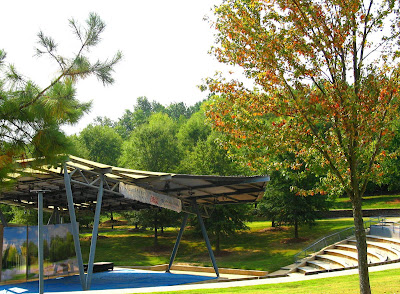 It looks smaller than it is in the shot above because there are iron tables and chairs behind the built in part and people also put blankets on the grass so it can hold a fair amount of people. I also chopped off the stage a bit in that shot. 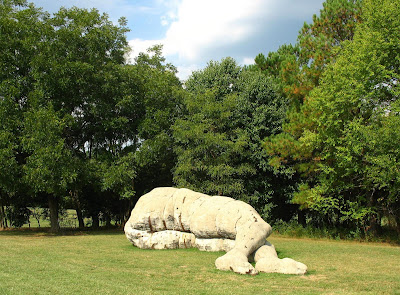 Collapse pictured above is another I already wrote about and posted in my last entry but in addition to being one of my favorite pieces in the open part of the park, it's also very different depending on where you stand so I shot it at a lot of different angles. If I don't get back before then, I have another doctor's appointment in December which will be near the museum and I'll plan on going back then. If it's cold I can do the inside museum tour. Silly not to go back before then since I only live about 15 minutes in a car from there. However, if I don't go back before December, I like the idea of planning fun outings in combination with nasty old doctor's appointments. I'm not suggesting the doctors are nasty. They are all reasonably pleasant. I mean the process of going to see a doctor which isn't on many people's fun list, mine included. 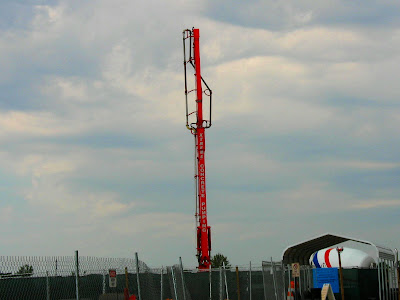 I'll end here with the piece of non art in the art park which I started with. Here we have form and function in motion, pictured after it has moved and formed a new image against the sky. I think if I were to write a survival guide for people lucky enough to survive their cancer but left with endless appointments, I will include a section called, try to schedule a play date for the end of your appointments. I realize that's not always possible and I'm fortunate in terms of where I live but also in terms of working from home. That means if I take a little longer for an appointment and there is a pile of work waiting at home, I work later. I am certainly aware of my good fortune. I do think it helps the medicine go down to duck into a museum park or botanical garden, or even to look up at the sky as you walk out the door; or at an interesting pile of elephant poop someone forgot to deal with. Yep, I'm ending on a silly note. I guess my point is that I am well aware it's not all interesting clouds and foliage or art. I am also aware that it has taken me two and a half years to begin to realize what was under my nose which could take the edge off the crap.
Posted by Carver at 2:34 PM

what a neat nature walk when it seems like something new awaits you at every turn.

Hi Carver, this is a very interesting place. I like Collapse because it is interesting but don't you wonder where the artist got the idea from.

Hi Theresa, I had the same thought about Juncture. I think it looks like a large ear of corn.

Hi JMB, I also wondered where the artist got the idea for Collapse. I did look online and not sure how much this helps but this is what I found:

"Two giant sculptures by emerging international artist Ledelle Moe have been installed in the North Carolina Museum of Art Park in Raleigh, NC. The artist was on site for the installation of her works Collapse I (2000) and Untitled (2007). These sculptures are the latest additions to the 164-acre Museum Park that includes a collection of site-specific works of art.

Moe's large-scale, concrete and steel structures echo the fallen icons of the Soviet Bloc and Apartheid, and speak to the destruction and erosion of monuments and history. The sculptures, from Moe's aptly-titled Collapse series, look as though they tumbled down from places of prominence in town squares or outside palace walls.

The prominently placed Collapse I, a massive, abstract human form resting on its side, stretches 30 feet in length along the Museum Park's primary trail. Untitled, a figure curled into a fetal position, was embedded in a more intimate setting in the woods. Both works are on long-term loan to the Museum.

Visitors may not realize that the two sculptures were created in the present day - and that is the artist's intent, according to Associate Curator of Modern and Contemporary Art Kinsey Katchka. "The sculptures appear eroded by time, and one wonders whether the forest grew around them, or if they somehow emerged from the earth," Katchka said.

Moe, a native of Durban, South Africa and long time resident of the mid-Atlantic region, came to the United States in 1994. She received a Master of Fine Arts from the Virginia Commonwealth University. Her work has been featured in a number of international venues including the NSA Gallery in Durban, South Africa, and the International Sculpture Center in Washington, DC.

Moe's recent projects include installations at Socrates Sculpture Park and Pratt Institute in New York City, and at Decatur Blue in Washington, DC. She now lives in Baltimore, MD, and teaches sculpture at the Maryland Institute College of Art."

I'll have to go back and photograph the other piece on the woodland trail which I didn't get to this week.

karoline in the morning said...

carver..how lucky you are to have such a beautiful place for you to wander...

I do feel very lucky. Funny how I often take it for granted but lately I'm doing better about taking advantage of what's under my nose or a shot drive away.

I especially love the wind machine- there's something very fascinating about it.

I like the wind machine too. I wish I had photographed it a few years ago with the horses in the field. I wasn't even sure it was part of the art on display or if it was a functional piece. I did read the plaque and realized it was art but it blended so well into the pastoral setting. I suspect with all the construction going on that the animals have been moved. I'm still not clear where the boundaries between the university and the museum are.

I like the second from top bizarre pole thing.

The Tate Modern Gallery on London's South bank has just "installed" a 60ft long crack in the floor as "art"... oh, and surprise surprise, 2 people have already fallen down it...

Hi Gledwood, That's wild about the crack in the floor. I'd probably think it was an optical illusion and fall into it too. Thanks for visiting.

I saw a red building; very run down, slummish (which is a word now) but it was painted bright, bright red; surrounded by very blah new buildings. but it was this bright bright building that stuck out. so I definately know what your are saying about modern art